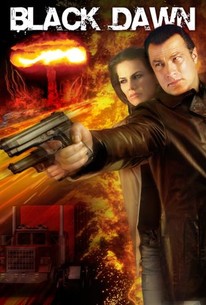 An undercover CIA agent must fight for his life when his cover is blown during a heated assignment in this action entry starring martial arts mainstay Steven Seagal. CIA agent Jonathan Cold (Seagal) is attempting to infiltrate a group of well-known arms dealers when his former student is captured and his cover is blown. Now, with little time to spare before the wrathful weapons dealers sell a powerful nuclear bomb to an Eastern European terrorist cell, Agent Cold must race to save his former student while simultaneously stopping the bomb from falling into the wrong hands.

J. Anthony Pena
as Guard No. 1

Joseph Ojomoh
as Guard No. 2

Paul Lane
as Henchman No. 1

Troy M. Gilbert
as Henchman No. 2

Erik Betts
as Henchman No. 3
View All

Steven Segal--still chopping (it's a struggle), still kicking (it's exhausting), still in a career slump (it's over, cookie).

Make no mistake, Black Dawn isn't good by any stretch of the imagination - but it's certainly a substantial improvement over some of Seagal's more recent efforts.

The movie is very much in the style of the Jason Bourne movies with the formula agency spooks and espionage stuff. The first and last 20 minutes are pretty good and even though the middle section drags quite a bit the movie still never had that feeling of being terrible like Today You Die. The bad guys aren't too clichéd while John Pyper-Ferguson is a welcome casting, even though he seems to be putting on a bizarre accent. The fight sequences, which are extremely few and brief, are poor. The poorness of the fights however are due to the fact that Steven Seagal isn't present in any of them, even though his character is involved. However there is a great car chase and the movie also includes some impressive stunts.