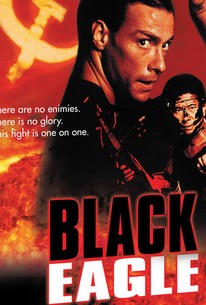 When a specially equipped F-100 jet is lost over the Mediterranean, the CIA kidnaps the children of a CIA agent to ensure his utmost cooperation in the retrieval of the plane. Unfortunately, there's a Russian agent hot on the trail of the craft, too.

George Portelli
as Captain of Gorky

Katie Van der Wakker
as Woman in the Field

Jason Trevison
as Officer on Deck
View All

Black Eagle offers literally nothing new to the espionage or action genres except for its fresh young heavy. It's remarkable as a time capsule and little else.

With one chase, one aborted fight and one small fight on a boat in the first 55 minutes, Black Eagle isn't exactly an action movie

Ah one of those old JCVD movies that wasn't actually a JCVD movie. I remember being fooled by this back in the day when I was a kid, the cool looking movie poster with both Kosugi and JCVD looking uber badass, the movie title in that striking old USSR logo, so much promise from one image. This movie is very much like JCVD's other early action flick 'No Retreat, No Surrender', he doesn't appear much in that film either, plus he also plays yet another baddie Russian character. So back in the 80's JCVD was kinda typecast as a Russian henchman, guess he had that look. The plot actually revolves around Sho Kosugi, a special ops operative who is called up to find some downed hi-tech equipment from the bottom of the Mediterranean. Some laser tracking devices went down with a jet that was shot down by whoever for whatever reasons. This is all set in Malta and is now very dated to look at of course, in fact the entire thing looks very much like an old James Bond flick, especially with the whole downed jet with hi-tech equipment scenario. It all feels very much like 'Never Say Never Again' to me. At first I thought this was just me but no! this movie does actually try its best to rip-off the Bond franchise. Hell there's even a smoky casino sequence with the main villain and his sidekicks at the roulette table facing off against Kosugi. The whole scene is clearly lifted straight outta the 007 universe, 'Dr. No' much! The location work for this movie is extremely impressive I must say, its easily the best aspect of the feature. Every scene is shot in and around the beautiful and awe-inspiring sand coloured stone structures of Malta and its various famous landmarks. To be quite honest most of this movie is actually rather dull frankly, all we see for the most part is Kosugi pussy footing around like a beige coloured ninja or swimming in crystal clear blue waters. He also has a sidekick, some other skinny dude who aids him with intel. The rest of the time it cuts to scenes with his two kids who eventually get kidnapped, and that's the only reason they are there...to be kidnapped. Sure Kosugi's bosses used the kids to get him to do this assignment but after that it makes no real sense why they hang around in the face of obvious danger. If all this hadn't been shot against this stunningly historic, sand coloured land of ancient wonder then it would be completely pointless. After lots of rather mundane dialog and hints of JCVD's grandness, we finally get a showdown between him and Kosugi. The setting is perfect, atop of some crumbling derelict old fortress wall (or so it seemed), a blazing sun high in the clear blue sky, both men glistening in the Mediterranean heat (oh my!), JCVD vs Kosugi, round 1, fight! Annnnd its all over in less than three minutes, yep a few kicks, a few ducks and parries, a bit of blood around the chops and its all over. We now have to wait to the very end for another face-off, ugh! Yep then its back to more of Kosugi prancing around with his skinny sidekick as they create their plan to infiltrate the villains main ship, thing is I can't remember why. Not that any of that matters now because this is the lead up to the main battle, the main battle against Ernst Stavro Blofeld and his hordes of henchmen aboard his...oh wait. Yep we now get a quick 'Commando' rip-off with Kosugi gearing up and covering himself in black tar by the looks of it, he does a sloppy job of it too sheesh! Lock n load with a bigass crossbow to rip-off Rambo a little bit, then its off we go to kill all the bad guys. This all leads to the finale fight with JCVD, round 2, fight! It lasts a bit longer this time but it never really hits it stride, both men seem to take turns in doing all their signature moves whilst trying not to hurt each other too much. Some nice swing and misses with sweeps and roundhouse kicks etc...but nothing that will get you frothing for more. I lost the plot ages ago with this, they were after these laser tracking devices and I'm sure Kosugi found them and won the movie halfway through, I dunno. It had to lead up to some sort of big showdown with guns and plosions. Its a very odd movie really, Kosugi isn't much of a leading man or fighter judging by this, plus his accent is very heavy and hard to follow at times. JCVD is wasted but does make a fun bad guy, whilst the main villains are pretty pathetic, completely non-threatening, just suits. Clearly they were trying for a slick Bond-esque type romp with semi-serious overtones, yet at the same time they throw in little bits from other franchises too just to make sure, they even get Kosugi's kids in on the action. In the end the plot goes MIA halfway through and it all becomes a very lame excuse just to get Kosugi facing off against JCVD (in a pretty location). The problem being its all a completely wasted opportunity because most of this film sucks, if anything it serves as a fantastic tourist advertisement for the Island of Malta and its idyllic cobbled backstreets.