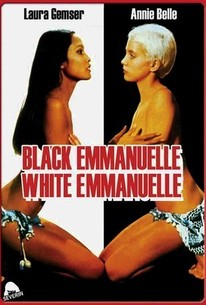 Like the cannibal films which followed, the Italian Black Emanuelle series (which, in fact, includes Emanuelle e gli Ultimi Cannibali) contains a very strong subtext of decadent Europeans oppressing other cultures. In many cases, as here, the instrument of oppression is the camera itself, and viewers of most Italian shock documentaries from Mondo Cane to Africa Addio probably didn't need a fictional softcore sex film to tell them that. The story line brings Emanuelle/Laura (Laura Gemser) back, but significantly as a model rather than her usual profession of journalist or photographer. The real shutterbug is Laura's sadistic boyfriend, Carlo (Gemser's real-life husband Gabriele Tinti), who stays with Laura at a fancy Nile River villa owned by pretty Crista (Nieves Navarro under her usual "Susan Scott" pseudonym). Various sexual intrigues ensue, involving Crista's daughters, a mute Arab servant, and Carlo's creepy habit of photographing Laura amidst backgrounds reeking of death and horror. There's also a wealthy gay pedophile (Feodor Chaliapin) and a goat sacrifice, but it's all really an excuse for Gemser to roll around naked in the sand with Annie Belle in one of the more memorable lesbian sequences in Italian exploitation. Fairly well directed by Brunello Rondi, the film was adapted from a story by another well-known exploitation director, Ferdinando Baldi, and edited by a third, Bruno Mattei. ~ Robert Firsching, Rovi

There are no critic reviews yet for Black Emanuelle, White Emanuelle. Keep checking Rotten Tomatoes for updates!

There are no featured reviews for Black Emanuelle, White Emanuelle at this time.