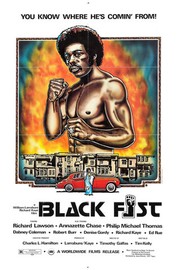 Sgt. C
March 12, 2014
(12%)
A low down cheapo blaxploitation that if it wasn't for a few half decent fist fights and a couple of funny lines it would be unbearably dull. Unless you're wanting to watch every movie of this type then I'd give this a big miss

Super Reviewer
Bruce B
January 22, 2014
Movie 2 of The Blaxpolitation Triple Feature Collection put out by Diamond Entertainment. This movie was good except for the ending. It stars Richard Lawson as the main character, Leroy Fisk. Also Dabney Coleman is in rare form as Heineken (not to be confused with the beer), a crooked cop. Also you see Philip Michael Thomas (of "Miami Vice" fame) in here as a wino. The plot is that Leroy is a street fighter working for the mafia, which includes a bumbling black henchman named Avon. One of the funniest lines came from Avon in the beginning when the boss meets Leroy for the first time when he says, "I'll show you what a brother like me can do for a brother like you!" trying to be tough. Heineken, the crooked cop mentioned before, tries to get his cut of the pay from Leroy. It turns out the cop and the mob boss are in cahoots and Leroy wants out. (HERE COMES THE SPOILERS, SO PEOPLE WHO DON'T WANT TO KNOW HOW THIS TURNS OUT STOP READING NOW!!! YOU BEEN WARNED!!!) Well after earning a load of money from his last fight, Leroy buys a club and one night, his brother-in-law pays him a visit. But things take a turn for the worse when Leroy's car gets bombed, but his wife and brother-in-law are in the car. Leroy swears revenge on the mob boss. Heineken also gets his by Leroy locking him up in a meat locker at a butchery, virtually freezing him to death. (BIG SPOILER COMING UP!!!) This is where the movie takes a really bad turn. The mob boss's rival tell Leroy that everything has been taken care of and that he's #1 now. Leroy ends up wrestling with the guy who shoots himself accidentally while grabbing for his gun. Then Leroy starts to lose it and have flashbacks of all the events that led to this and he starts punching mirrors all over the place, and that's it. 3 Stars 1-21-14

Keenan S
August 16, 2013
Also known as The Black Streetfighter, this film is an okay blaxploitation film that is saved by solid fight scenes and hammy moments. However, this film tries to take itself too seriously, which makes it drag at some points. This film manages to keep itself afloat and it's not a bad way to spend an hour-and-a-half. There are far more entertaining blaxploitation films to watch, but this is an okay one, and you can do a hell of lot worse when it comes to obscure films.

joe d
½ April 26, 2013
Dismal, boring etc. There are a few actors who actually act in this one, Dabney Coleman and another minor character. That's it. The rest of the crew is worse than a high school Death of a Salesman.

Michael M
½ March 19, 2012
Basic and violent with a gritty urban blaxploitation flavoring. Really, if not for the choppy editing of this film, this probably could've been a really talked about film.

Michael M
½ March 15, 2012
Basic and violent with a gritty urban blaxploitation flavoring. Really, if not for the really choppy editing of this film, this probably could've been a really talked about movie.

wild willie n
August 7, 2011
passable blaxploitation with Dabney Coleman being the main reason to tune in.

Super Reviewer
Greg S
February 15, 2010
A streetfighter from the ghetto has a vendetta against the mob and a crooked white cop (Dabney Coleman). Boring formula movie; there's a reason why, when people discuss memorable blaxploitation features of the 70s, the name BLACK FIST never comes up.

Senor C
June 23, 2009
Black Fist is run of the mill blaxploitation fare which is highlighted by a scuzzy Dabney Coleman (does this guy ever have a role where he's not a son of a bitch).

Adam A
½ January 17, 2008
The film itself isn't great. The story is simple and drags from time to time, and the ending is a bit weird. The lighting, as with many Blaxploitation films, leaves much to be desired. But still, all those things aside, this film is surprisingly watchable. The street fights, although no Sonny Chiba or Bruce Lee, are handled well for the most part. And I guess I'm just a sucker for a good revenge flick. So if you're in the mood for some Blaxploitation that you can actually sit through, give this film a shot. Trust me, I've seen much much worse.

Steve M
January 1, 2008
A young tough (Lawson) enters the violent world of streetfighting to make some quick cash so he can provide his pregnant wife and their child with a prosperous future. When he refuses allow a corrupt police detective (Coleman) and the coldhearted fighter promoter (Burr) to take adavantage of him, a series of events are set in motion that will lead to tragedy for all.

"Black Fist" is for most of its running time a fairly engaging, well acted film. There's nothing terribly original here--it follows the same pattern as the vast majority of blaxploitation films and the cast of characters are all stock figures--but the script is tighter than most and the acting is far, far better than one might expect. Richard Lawson in particular gives a fine performance, and Philip Michael Thomas is lots of fun as two different 1970s pimp-tastic stereotypes, both of which come to bad ends.

Unfortunately, as the film reaches its climax, it completely falls apart.

The second half of "Black Fist" is a revenge tale, with Lawson's character working his way through the crime syndicate that backed the streetfights to deliver payback. However, the film suddenly takes a sharp right turn, breaking with the conventions it been following almost religiously, and provides an ending that is weird, anti-climactic, and just plain bad. It's a "what the hell?" sort of ending, but not one that makes you think... it just makes you annoyed, because it's completely out of step with the 90 minutes that led up to it. (I suspect the fimmakers thought the final shot would be thought-provoking; I thought it was trite and stupid.)

I wonder if there wasn't a different ending originally intended for this film... perhaps even a different story flow. It would explain the unusual credits where a Richard Kaye is noted as having directed and scripted "additional sequences" for the film and some of the odd jumps in events. Kaye's other few credits are for producing, so I wonder if he took it upon himself to redo the ending of the film after most of the cast and crew had move on--which would explain the unsatisfying off-screen dispatching of the film's main bad guy (Robert Burr) and that he attempted to set it up by inserting scenes and references to an "overboss" who wasn't part of the original film.

What little research I felt inclined to do did not support or disclaim that theory, so in the end all I can do is chalk it up to another low-budget movie that could have received a higher rating--and provided a far more satisfying viewing experience--if not for some bizarre choices made at some point in the production process. This film was earning itself a low Seven until the final few minutes... then it barely managed to rate the Six I've given it. It only hung on because of the strong performances on the part of the featured actors.

Evan A
January 1, 2008
A great C-movie. Really, fun to watch, especially since it thinks its the next Taxi Driver.