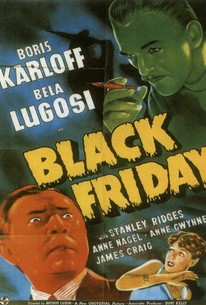 When his friend Professor Kingsely (Ridges) is at deaths door, brain surgeon Dr. Sovac (Karloff) saves his life by means of an illegal operation that transplants part of injured gangster Red Cannon's brain. Unfortunately, the operation has a disasterous Jeckll and Hyde side effect and under certain conditions the persona of Cannon emerges. Sovac soon learns of the duel personality and of half a million dollars the gangster has hidden away. He attempts to find the money through the manipulation of his friend, an attempt that brings Kingsley closer to madness as he alternates between a meek professor of english and a brutal gangster out for murderous revenge on those who tried to kill him.

Sequences like the one of the outrage, or the subsequent murders, each one more cruel than the other, reveal Lubin as a director more audacious than he seemed to be. [Full Review in Spanish]

While Karloff would continue to prominently appear in horror flicks for the remainder of his life, Lugosi found himself already being relegated to inconsequential bit parts.

Vastly inferior to the other Karloff-Lugosi vehicles from Universal, but it's actually a pretty sharp little horror film -- and of some note historically.

The results are a mixed bag, but there's enough entertainment to be gotten from this B-film to make it a satisfying watch.

The best Karloff/Lugosi teamup I've seen.Gangster's & a mad scientist trying to figure out where the $$$ at,A man who switches back & forth between a gangster & himself after a brain transplant.This flick is definitely something different

This is a fantastic old horror movie, I really enjoyed it, and I highly recommend it. It has a good cast and story.