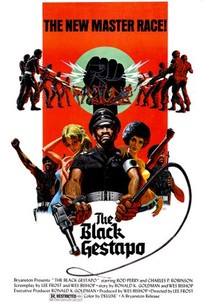 An interesting (if extremely violent) twist on the standard blaxploitation formula, this crime film deals with a black militant-group, led by Charles P. Robinson, whose members decide to clean up their Watts neighborhood by ridding it of white gangsters. Extreme mayhem follows, with slimy Caucasian hoodlums being castrated, shot, and flung from windows, but the black heroes begin overstepping their authority. Soon, they are no better than the mobsters and are even goose-stepping and chanting Nazi slogans, leading the community to revolt. Rod Perry stars, and cult pin-up queen Uschi Digart can be seen as a prostitute.

David Bryant
as Pusher
View All

News & Interviews for The Black Gestapo

View All The Black Gestapo News

Critic Reviews for The Black Gestapo

There are no critic reviews yet for The Black Gestapo. Keep checking Rotten Tomatoes for updates!

Audience Reviews for The Black Gestapo

Wow, definetly a product of the time. The subject matter should be taken with more grains of salt than I can count. This sucker is through and through exploitation fare. This is the first film I've seen by Lee Frost and Wes Bishop and it's about a group of african-americans in Watts that make their own people's army to defend against the white oppressors. For a 70s B-action shocker this holds nothing to dissapoint with it's fair share of violent, and for those who are concerned, there's more breasts than blood in this, and there's a bit of blood. The last 15 minutes really takes it home although the entire film is directed pretty interestingly and entertainingly. This doesn't fall into normal blaxploitation subject matter so it's hard to categorize it as so, but if you are a fan of psychotronic cinema see it.