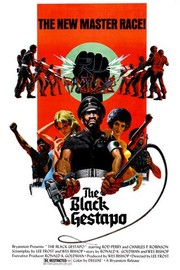 Richard L
½ July 14, 2016
The title is a bit misleading. This movie is about a split-up between a left-wing and a right-wing black militant group. While the left-wing group tries to help the poor, the right-wing group replaces the white gangsters.

Bill B
½ January 27, 2016
This was pretty average Blaxploitation fare, as it never quite lived up to the fantastic and eye-catching poster art, but it does feature Charles Robinson (AKA Mac from Night Court) as a particularly menacing character, so that's something you don't see every day.

Ian C
February 1, 2015
It has to be seen to be believed. The main Mafia boss and his shih-tzu, a militant training camp that makes 'Police Academy' look like 'Full Metal Jacket' and Phil Hoover as Vito trying to pick up a black chick are just some of the things that makes this comedy gold. It is brutal in parts, most notably someone getting their jaffas chopped off and flushed down the toilet. Terrible, I love it.

Randy P
April 29, 2014
It's a great grind house flick, I really hope Tarantino gives this a thought. Since the idea is thought provoking that what if blacks turned against whites or even enslaved them.
Back in the 70's this would have been really offensive, but today standards the offensiveness makes this more enjoyable.
It could be a much better film if this was remade.
Fun film to watch.

Sgt. C
½ March 12, 2014
(9%)
A dire blaxploitation movie that's so badly made and boring that is should have stayed in the vaults of a run-down grindhouse cinema for ever more and never seen the light of day again. Nothing to see here besides the sleazy trailer.

Michael W
½ January 7, 2014
Militant black organization runs the syndicate out of the neighbourhood, only to employ its self-serving methods for themselves. A rare blaxploitation that shows blacks as corrupted by power as the former establishment. Marked by some excessive and graphic violence.

Keenan S
September 9, 2013
The Black Gestapo is one of the most gloriously stupid films I've ever seen. The premise alone about a black militant group modeling themselves after Nazis promises a great deal of humor, but this film takes that ridiculous premise and adds a whole bunch of stupid things into the mix such as romance, sex and nudity, plenty of action scenes, hilariously bad dialogue, gangsters, drugs, back-stabbing, and so much more. This film made me fall in love with it in the same way films like Escape From L.A. and Doomsday by being gloriously idiotic and embracing its campyness to the fullest degree. It's pure, nonstop fun that will have you laughing, saying "What the fuck?" constantly, and feeling a sense of joy from watching so much stupidity unfold. The Black Gestapo is beyond any doubt one of the greatest so bad it's good films I've ever seen.

joe d
April 26, 2013
Not bad premise only so poorly acted that it is nearly unwatchable.

Shawn W
½ October 27, 2012
Blaxploitation action sees a splinter group from the peaceful helpers of the disadvantaged People's Army turn violent to oust a white crime syndicate only to exploit the same people. Attempts to make connections to the Nazi Gestapo are weak.

Forrest P
September 21, 2012
The Black Gestapo is a painful film to sit through because of its awkward pacing, relentless 70s music, and its uncomfortable storyline. In spite of all that, though, I was able to get a little enjoyment out of the film's fight scenes (which are surprisingly well done) and some competent acting. Still, the blaxploitation genre is a little uncomfortable to watch.

I cannot say that I recommend anyone say this movie. But, it isâ¦ interesting. It may be garbage, but it is at least fascinating garbage.

The Black Gestapo stars Rod Perry as General Ahmed, a man who starts an inner-city army to protect and avenge the wronged black and female citizens of the city of Watts. There is quite a bit of violence and nudity in this picture, and if that does not bother my esteemed reader, then this film should be a breeze. There is not much more to this film than that.

Like I said before, the fight scenes in this film are quite well done. In fact, I would go on to say that they are borderline fun to watch. They are well-choreographed, real-looking, and occasionally a tad thrilling. There is also a lot of stunt work in this film that I found to be well done. This was a pleasant surprise, considering the alarmingly low production values in this picture. The film itself is just not pleasant to look atâ¦ which is a major downside to the picture.

Overall, the film is not worth watching. Sitting through the ninety minute run-time feels like a chore, partly because the pacing is ridiculously and painfully inconsistent, and partly because the storyline is just not engaging enough to keep us entertained. Yes, the fight scenes are pretty fun, but Iâ(TM)m sure a curious viewer could find clips of them on youtube.

Alli A
September 16, 2012
Pretty cool blaxploitation has the good guys go bad, except one who retains his dignity. Violent and action packed, fun and disturbing.

Blake V
June 5, 2012
This is an extremely entertaining movie. The Black Gestapo lacks depth and complexity, but as I expect most people dont pick up a Nazi-Blaxploitation film looking for those qualitys. Most people are interested in its shock value and there are a few scenes which definitely shock. There are quite a few interesting action sequences which were more clever than I expected. The acting is nothing special, and at times so bad its good.

Michael M
March 28, 2012
It's a rare instance where blaxploitation and nazisploitation merge... this is either really good and really terrible, isn't it?

Jason R
½ September 12, 2011
A fun movie, bad dialogue, bad fight scenes and a little bad gore. Some what of a lame ending but I it held my attention very well and had some comedic moments

Sean C
½ August 28, 2011
Blaxploitation is rarely this funny or even this action packed. Stereotypes abound, scenes have little direct relation to each other, and IĂ˘(TM)m not sure how or why they became "the black Gestapo." But hey it's got breasts!

David H
October 4, 2010
A real Blaxpoitation Dynamite it is one of best Movies of this Genre and also a Crossover with the Naziploitation Genre it is a very exciting, amazing and shocking Movie and shows how a good-willed Thing can overflow in something bad and brutal many Gangs have a similiar History a current Case is the Mara Salvatrucha

Bryan G
July 13, 2010
I've kind of got a soft spot for blaxploitation films, which sometimes are among the strangest films around. Last year I experienced some of the horror films that filled this genre of film, and that interested me in seeking other more unusual ventures in blaxploitation. So naturally when I stumbled on a film called The Black Gestapo I had to pick this one up. Because, when it comes to the Nazi's and what they stood for, seeing a bunch of black men joining the ranks just didn't make sense to me.

Well, it turns out that The Black Gestapo isn't as I thought it to be. Sure, this group of men do wear the signature threads that the Gestapo wore, emblems and all, and even mimic some of their salutes and such. But they aren't going around singling out Jewish people, but rather the oppressive white leaders in government, the police force and local mobsters. Such a weird identity for this group to assume, but within the context of the film it does actually work. And I genuinely liked what The Black Gestapo had to offer.

The movie starts off with General Ahmed (Rod Perry), who leads an inner-city group in Watts, a neighborhood in Los Angeles, California. The group's original intention was to protect the black citizens of this area, but the oppression of the more powerful whites makes this difficult. So Ahmed's second in command, Colonel Kojah (Charles Robinson), asks if he can form a secret group that will use violence to cut down on the threats facing Watts. It works at first, as the Black Gestapo drive out their enemies. But the Black Gestapo's power hunger gets too severe, and they turn into what they swore to protect their people from.

That is what I came to like about The Black Gestapo so much. This group was using terrible, violent acts to protect themselves, which is usually condoned in these sorts of films. But about midway through the film our heroes turn out to be the real villains of the story, and Ahmed must become a one man army to bring them down. It isn't the deepest film you're going to see, but The Black Gestapo has a lot more substance to it than one would originally think it to after reading the title.

The Black Gestapo is one of the better blaxploitation films I've seen, with better acting and storytelling than I've come to expect. It's a nice little hidden gem that I think fans of this genre of film-making should seek out. You'll never look at the Gestapo the same again, that's for sure.
Page 1 of 3