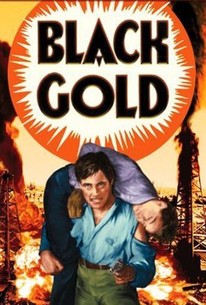 Stodgily directed by actor Russell Hopton, this low-budget oil-drilling melodrama was one of three action-adventures teaming boy actor Frankie Darro with B-Western villain LeRoy Mason, the latter changing his billing to "Roy Mason" for the occasion. Young master Darro plays Clifford Riley, nicknamed "Fishtail," whose father Dan (Frank Shannon) is killed when a rival, J.G. Anderson (Berton Churchill), sabotages his oil well. Enter geologist Hank Langford (Mason), who persuades "Fishtail" to hold on to the potentially valuable well. In retaliation, Anderson has Hank abducted, but the young geologist manages to escape. Learning that Anderson is planning to blow up the Riley well with nitroglycerin, the hero arrives just in time to rescue "Fishtail," but Anderson is killed in the ensuing explosion. The blast also causes the well to come in and both Hank and "Fishtail" emerge from the wreckage as millionaires.

There are no critic reviews yet for Black Gold. Keep checking Rotten Tomatoes for updates!

There are no featured reviews for Black Gold at this time.