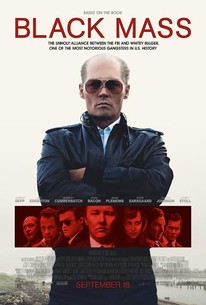 Critics Consensus: Black Mass spins a gripping yarn out of its fact-based story -- and leaves audiences with one of Johnny Depp's most compelling performances in years.

Critics Consensus: Black Mass spins a gripping yarn out of its fact-based story -- and leaves audiences with one of Johnny Depp's most compelling performances in years.

Critic Consensus: Black Mass spins a gripping yarn out of its fact-based story -- and leaves audiences with one of Johnny Depp's most compelling performances in years.

In 1970s South Boston, FBI Agent John Connolly (Joel Edgerton) persuades Irish mobster James "Whitey" Bulger (Johnny Depp) to collaborate with the FBI and eliminate a common enemy: the Italian mob. The drama tells the story of this unholy alliance, which spiraled out of control, allowing Whitey to evade law enforcement, consolidate power, and become one of the most ruthless and powerful gangsters in Boston history. -- (C) Warner Bros

Brian A. White
as Prisoner

Kathryn A. Beauchamp
as Nurse

Scott Cooper appears to have made Black Mass under the assumption that his work was half done the moment he jotted the words "Boston-set crime drama" on a notepad.

Depp sticks out like a sore thumb in an otherwise bland crime drama. And when the film isn't distracting, it's mostly just plain boring.

Yes, it's a relief to see Depp playing a real character again, not another one of his circus freaks -- I just wish he'd been given a better film to operate in.

A a well-crafted, well-acted, and competently executed movie that you've seen many, many times before.

Depp has never been short on menace, and he is so unpleasant as Bulger that his usual gangster charm never kicks in, leaving the audience cold.

Packs a nasty gangland punch, but lacks the Corleone clout necessary to back up its much-discussed blood-and-honour themes.

Johnny Depp plays a monstrous Boston gangster in a disguise so unsettling you'll struggle to recognise him.

Though building upon favorable groundwork and populated with engaging performances, it loses much of its appeal by relating its shocking plot with an absence of panache.

Depp has argued that it's not truly a gangster film.

[Depp] exists in a bubble, unaffected by all the shortcomings happening around him. His work single handedly makes this worth watching.

With uniquely fascinating source material, the bland "Black Mass" can't feel like anything but a missed opportunity.

Johnny Depp's chilling and transforming performances is the highlight of this gritty, true-to-life adaptation of an American crime story. Black Mass' star-heavy cast (including Edgerton, Cumberbatch) and its calculating direction helps emphasize the brutality and impact of this notorious gangster. 4/5

Black Mass is Scott Cooper's bio-pic about the legendary Boston gangster Jimmy "Whitey" Bulger (Johnny Depp) and his reign as the most feared man in Boston. Bulger takes an unconventional route to the top by not only being the brother to State Senator Billy Bulger (Benedict Cumberbatch), but he is also an informant for F.B.I. agent John Connolly (Joel Edgerton). The film follows the two decades of Bulger using his law enforcement contacts to protect himself and his business. Whitey may have been a rough and tough guy, but he was far more intelligent than he is given credit for. Depp plays Bulger with a kind of resolve and immersion that we haven't seen from the actor in a long time. To rob Breaking Bad, he becomes the danger. People fear him and he knows it with Depp playing the role perfectly. It also turns out that this story also belongs to Edgerton's character, who feels the link to South Boston, but unwittingly falls into the corruption of the Bulger organization without even himself realizing it. The film is not so much a cat and mouse film as it's seeing what Bulger can get away with next, and he gets away with quite a bit. Most of the performances in the film are spot on and give the film a richness it needs. The issues that come with this film are in the presentation of the story. For a quarter of a century people have tried to reinvent the vibe from Goodfellas (even Martin Scorsese is a known offender). Black Mass is no different and it pulls you from the story because it feels like the director is trying too hard to recapture past gangster film triumphs. There's a reason why we never see films attempt to repeat The Godfather's karma- many have failed and are lost to our memories. Black mass may go beyond going down the drain of films forgotten, but it still feels forced. Add to that the connections between this film and Scorsese's The Departed and you add to the issue. A word of warning when watching this film. If you have seen The Departed you will be reminded of bits and pieces from that film. Of course The Departed is a re-make of the Asian film Infernal Affairs and the broad premise of the film is based on Bulger's life, which doesn't help in the matter. It will take the first forty minutes of the film to go by before you stop comparing it to The Departed, taking away from the experience I'm afraid. Overall the film is a well acted piece that really tries too hard to be a classic gangster film. This will probably be a forgotten piece in five years time, reminding you of its existence on late night television. This is really a shame because Depp's performance is one of his best in recent memory and shouldn't be thrown away and forgotten. A well acted film that fails to really capture the audience because none of the characters are very sympathetic. A missed opportunity.

Perhaps it's a far greater travesty that Johnny Depp, at age 52 and three Oscar nominations, has never won one and that those nominations were more awarded for pop novelty (Sweeney Todd and Jack Sparrow) than actorly craft (the not nominated Gilbert Grape and Ed Wood). As infamous mobster Whitey Bulger, Depp is appropriately terrifying, though the story is convoluted and episodic to the point that I don't know if the role was truly nuanced or challenging. For the longest time, I thought Jesse Plemons was Matt Damon in plaster makeup. Juno Temple is pretty dang good in the third degree scene. Her fear is so tiny yet fierce.