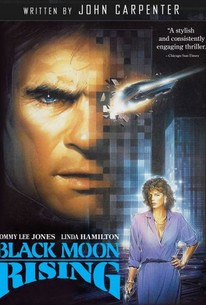 A John Carpenter story served as the launching pad for Black Moon Rising. Veteran thief Quint (Tommy Lee Jones) is hired by the FBI to steal some politically volatile computer tapes. The owners of the tapes are displeased, and begin chasing Quint all over the countryside. Just when he's about to surrender his booty, Quint's car -- wherein the tapes are stored -- is stolen by Nina (Linda Hamilton). She delivers the car to her corporate-villain boyfriend Ryland (Robert Vaughn), who runs a hot auto ring. Nina then has second thoughts and decides to throw in with Quint...and round and round we go. The "Black Moon" of the title is the name Quint's high-tech, low-slung vehicle.

Stanley DeSantis
as The Mover

It all gets off to a cracking start, only to dwindle very rapidly into thin and predictable variations on the formulaic ploys.

Like a stolen car, it moves pretty fast, if erratically.

Cokliss's direction strains for a stylishness it doesn't achieve, yet his fundamentally straightforward style brings out the abstract design of the plot.

...generally far more engaging and compelling than one might've anticipated...

It's probably never much more than the sum of its curious parts, but ultimately does result in an enjoyable ride.

The film looks good, but it's never as zippy as its plot requires.

Black Moon Rising is the epitome 80s movie and I loved every minute of it.

One long, fuel economy-eroding idle before a mildly interesting vehicle stunt. For all its potential, "Black Moon Rising" only proves history's deep, dark cracks are there for a reason and some movies are fated to fall into them at 325 miles an hour.

It took three screenplay writers to concoct this rather unamazing action-thriller about cars, thieves, and dirty tricks.

There are no featured audience reviews yet. Click the link below to see what others say about Black Moon Rising!