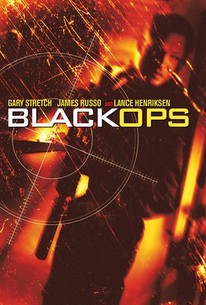 A World War II-era battleship that has been reactivated and redeployed to the Persian Gulf for black-op interrogations has fallen into radio silence, and elite Marine task force, an NCIS investigator, and a pair of scientists is sent to investigate and report back on any abnormalities. Upon boarding the ship, the Marines are horrified to discover that nearly the entire crew has been ruthlessly slaughtered. But there are a few survivors, and they know that the man responsible for the butchery is a notorious terrorist who operates under the name Fadawi. Now, as the few remaining survivors lead a trained task force directly into Fadawi's lair, they become locked into battle with an enemy who will stop at nothing to kill them and destroy everything they represent.

Matthew Alan
as McCloskey
View All

Tom Paton's Black Ops has all of the best intentions but fails to hit most of them. A forgettable military/horror thriller with a mild dab of surrealism, this movie is not worth your money or time.

Saw this mainly for Lance being in it hehe as guessed its pretty lame and cheap looking, more of a straight to TV film with many rips from many other films, the first that springs to mind is Aliens really haha the setup is similar.....group of special forces go into a dangerzone that has been lost contact with to find out what has happened and rescue, you can guess what happens next.