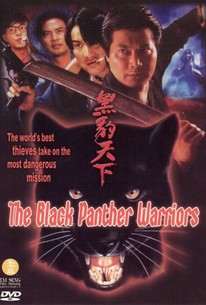 Clarence Fok Yiu-leung spins this slick action-comedy crime flick featuring an all-star cast. The film centers on Black Cougar (Alan Tang Kwong-wing), a crack thief who gets the job of a lifetime -- a shadowy client is paying him an obscene amount of money to swipe a photograph from a police station. Alan enlists the help of cabal of master criminals including a sexpot weapons specialist named Ching-ching (Brigitte Lin Ching-hsia), a gambling maven (Tony Leung Kar-fai) and an infantile computer geek (Dicky Cheung Wai-kin) who goes berserk if he doesn't have a pacifier to suck on. The group quickly learns that the whole thing is a set up by Black Cougar's evil brother Bloody Wolf (Wah Yuen). While Black Cougar gets captured by a band of villains, the rest of the team is forced to fend off the baddies.

There are no critic reviews yet for Black Panther Warriors. Keep checking Rotten Tomatoes for updates!

There are no featured audience reviews yet. Click the link below to see what others say about Black Panther Warriors!