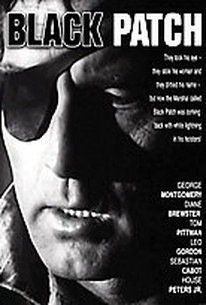 George Montgomery both produced and starred in the psychological western Black Patch. Written by character actor Leo Gordon (who also appears on screen), the story revolves around one-eyed marshal Clay "Black Patch" Morgan (Montgomery). The marshal is delighted to find out that his old buddy Hank Danner (Leo Gordon) is riding into town, but less than thrilled to learn that Danner is now a wanted outlaw. Reluctantly throwing his friend into jail, Morgan sets off a chain reaction of terror, beginning with a jailbreak engineered by crooked saloonkeeper Frenchy De Vere (a particularly vicious performance by Sebastian Cabot) and culminating in a showdown between the marshal and Danner's young protégé Flytrap (Tom Pittman). This is the sort of film in which a rape is represented by the symbolic opening and closing of a screen door. Black Patch seems pretentious when seen today, but in 1957 a western never lost money at the box-office.

'Black Patch' has little to offer, either in a direction that moves between bland and excessively theatrical or performances too affected to be credible. [Full Review in Spanish]

There are no featured reviews for Black Patch at this time.