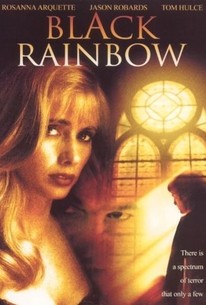 British director Mike Hodges brought an extra measure of integrity to this made-for-TV thriller. Rosanna Arquette stars as Martha Travis, a psychic who travels the rural American South with her alcoholic father, Walter (Jason Robards), plying her mystical trade for credulous yokels. In reality, Martha is a con woman whose only gift is the ability to defraud those who seek messages from dead loved ones. However, one night the bogus medium intercepts mental images of a murdered man whose wife is in the audience -- and indignantly proclaims that her husband is still very much alive. Within hours, however, Martha's vision becomes reality. Martha has suddenly developed the ability to see murders before they happen, but her newfound ability to prognosticate puts a professional contract killer on her trail. In the meantime, Martha becomes lovers with Gary Wallace (Tom Hulce), a small-town reporter who's intrigued enough by Martha to write a story about her, although he's skeptical about her supernatural talents.

Joe Inscoe
as Airline Clerk No. 2

Ed Lillard
as Pastor on Train

Arquette and Robards are delightful when they chew scenery together, taking any leaps of motivational logic and making them as fun, melodramatic, and even trashy as possible.

An overlooked supernatural thriller that has strong performances and an interesting premise. The story has a tendency to wander, but it is worth watching.

Black Rainbow is intriguing enough to overcome its flaws and make for a darkly entertaining and solidly put together thriller.

A great picture? No, but an intriguing one.

An effectively eerie supernatural thriller - even if it tries to exorcise a few too many ghosts for its own good.

The result is a stimulating film addressed to the intellect ...

There are no featured audience reviews yet. Click the link below to see what others say about Black Rainbow!