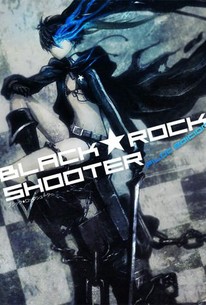 Black Rock Shooter begins at the start of the school year in April. On her first day of junior high school, Mato Kuroi makes friends with a girl named Yomi Takanashi who recently moved to the town. Mato quickly joins the basketball club, which incites Yomi to join the volleyball club since both clubs practice at the same time in the gymnasium. The two spend much time together over the following year, and during one outing Mato gives Yomi the same cellphone charm she has. In their second year of junior high, they end up in different classes, reducing the amount of time they can spend together. Furthermore, Yomi starts to become jealous of Mato hanging around her basketball club manager and classmate, Yuu. When Yomi seemingly disappears, Mato becomes concerned when she does not show up at school the next day or respond to her text messages. Mato becomes further depressed when she receives word that Yomi has been reported missing and is asked about her whereabouts by two detectives. One day, Mato receives a blank text message from Yomi and goes to her favorite spot in town where she finds the phone charm she gave her. The charm starts to glow and transports her to a strange world where she meets a mysterious girl named Black Rock Shooter, who has a blazing blue left eye and a rock cannon which can fire 20 shots per second. As Mato tries to find Yomi, she merges with Black Rock Shooter and duels Yomi, who was possessed by an evil being called Dead Master, who wields a large scythe. As the possessed Yomi is about to fall to her death, Black Rock Shooter saves Yomi from falling, and embraces her, causing Yomi's body to be free from Dead Master. Yomi and Mato return to their normal lives, but Yuu begins to act strangely.

Uniquely telling a very mundane teenage drama in our world as a hyperkinetic science fiction extravaganza in another, Black Rock Shooter is a weird but wonderful series.

There are no featured audience reviews yet. Click the link below to see what others say about Black Rock Shooter (Burakku Rokku Shuta)!