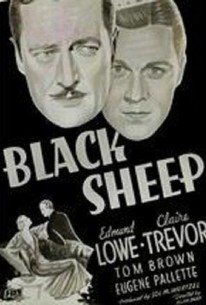 The Black Sheep is professional gambler John Dugan (Edmund Lowe), who gets his kicks out of fleecing wealthy suckers during a Transatlantic ocean voyage. But when Dugan sees innocent young Fred Curtis (Tom Brown) being made the fall guy for a jewel robbery, he decides to help the poor boy out. What Fred doesn't know is that Dugan is his own father, desperate to make amends for his past indiscretions. Never revealing his true identity, Dugan rescues Fred from the clutches of beautiful predator Millicent Bath (Adrienne Ames). The musical score is by Oscar Levant, whose legendary dislike for thick-eared Hollywood executives never prohibited him from picking up his paycheck. Black Sheep represented director Allan Dwan's first effort for the newly former 20th Century-Fox Corporation.

Delightful comic caper about a rogue who tries to help the innocent, done with Allan Dwan's creative visual style.

Tightly made little shipboard conman caper with the forgotten Edmund Lowe quite dashing in the lead and the always excellent Claire Trevor full of sass and glamour as a flip amateur shill with a soft spot for Lowe. Throw Eugene Pallette in and you have a breezy little number that sails by in less than 75 minutes.