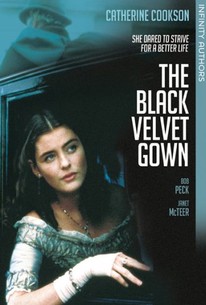 Filmed for British television in 1991, Black Velvet Gown is a two-part adaptation of Catherine Cookson's novel. The story begins in 1834; Riah Millican (Janet McTeer), left penniless by her husband's death, is evicted from her home along with her children. She takes a job as housekeeper for Percival Miller (Bob Peck), the reclusive master of Gulmington Mansion. Soon Riah is ruling the roost, as it were, and is in a position to hire and fire servants on her own. Part Two involves the arrival of illiterate serving girl Biddy (Geraldine Somerville), and the ensuing consequences. Black Velvet Gown was telecast in the US in 1993 on PBS' Masterpiece Theatre. ~ Hal Erickson, Rovi

The actors are first class as they interpret what's there; trouble is that what's there - the story - becomes almost a parody of earlier, sturdier Masterpiece Theatre fare.

There are no featured reviews for The Black Velvet Gown at this time.