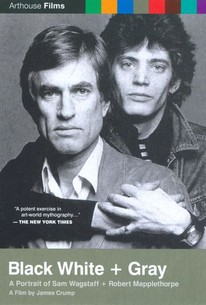 Critics Consensus: Vital documentation of an unsung 70's art patron and his famous photographer lover. A vivid and tragic story.

Critics Consensus: Vital documentation of an unsung 70's art patron and his famous photographer lover. A vivid and tragic story.

Critic Consensus: Vital documentation of an unsung 70's art patron and his famous photographer lover. A vivid and tragic story.

After serving in the Navy during World War II, Sam Wagstaff came home to New York City and pursued a career in advertising, and through his work in the ad game he developed a keen interest in photography. Reflecting his own personal evolution as he came to accept his homosexuality, Wagstaff became an enthusiastic collector of art photography and gained a reputation as a curator, organizing a number of important museum shows of new photographers and becoming a friend and confidante of artists such as Andy Warhol, Frank Stella, Richard Tuttle, and Tony Smith. In the early '70s, Wagstaff met a young photographer, Robert Mapplethorpe, who shared a loft with his best friend, a poet and aspiring musician named Patti Smith. Wagstaff and Mapplethorpe became first friends and then lovers, and as enthusiastic supporters of Smith's work they traveled between New York's upscale art community and the punk rock scene that was emerging on the Bowery. Passionate allies in art and life who explored the edges of human experience, Wagstaff and Mapplethorpe were partners for life, but their lives were cut short by AIDS -- the disease claimed Wagstaff in 1987, and Mapplethorpe in 1989. Black White + Gray: A Portrait of Sam Wagstaff and Robert Mapplethorpe is a documentary by filmmaker James Crump that explores the lives of two remarkable people, their circle of talented friends, and the community and times which surrounded them. Black White + Gray received its world premiere at the 2007 Tribeca Film Festival.

This is a terrific documentary by James Crump about the unsung collector, Wagstaff, and his lopsided relationship with his hungry young lover, Mapplethorpe.

Crump's film colourfully depicts Wagstaff's complex inner mindset and rarefied eye for imagery by allowing the stunning prints to linger on the screen.

The movie makes its main point. Wagstaff was an important, complex, fascinating figure, well worth remembering.

Wagstaff's character accounts for some of the frustration the film induces. Crumb's documentary style accounts for the rest.

Wagstaff was a fascinating figure and deserves the detailed tribute provided here.

A potent exercise in art-world mythography.

Good taste is examined in all its implications in James Crump's elegant documentary Black White + Gray: A Portrait of Sam Wagstaff and Robert Mapplethorpe.

Crump's film is a vitally important document in this respect, bringing out Wagstaff's personality and vividly capturing the stories of the people who knew him.

A well made portrait of an intriguing man, presented with a tragic but resounding weight.

Let's hope this is the springboard for a biopic on the art world's dynamic gay duo - maybe by the time it gets made we'll even have some openly gay actors to play the parts.

This ham-handed interpolation of irrelevant footage is the chief demerit of his movie.

The more famous Mapplethorpe is moved aside to give Sam Wagstaff the spotlight. But the best photography in the world steals the show.

In cataloguing the relationship between art collector Sam Wagstaff and photographer Robert Mapplethorpe, the documentary "Black White and Gray" does a good job of showing the role of the collector in the art world, especially Wagstaff who was very influential in shaping tastes, especially in the realm of photography. The emphasis is more on Wagstaff which is okay since so much has already been written about Mapplethorpe. Strangely enough on the subject of Mapplethorpe's photgraphy, the movie is oddly timid, going around in circles in desperately avoiding to admit the eroticism of the photographs. The same could be said about the details of the relationship.(Luckily, Patti Smith is on hand to fill in the blanks of how unique it was, with her actually being an equal partner.) Yes, it is possible that Mapplethorpe used Wagstaff but if that's the case, then I would agree that Wagstaff also used him, as like any relationship both partners had a profound effect on each other and on the wider art world.