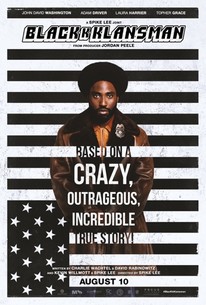 Critics Consensus: BlacKkKlansman uses history to offer bitingly trenchant commentary on current events -- and brings out some of Spike Lee's hardest-hitting work in decades along the way.

Critics Consensus: BlacKkKlansman uses history to offer bitingly trenchant commentary on current events -- and brings out some of Spike Lee's hardest-hitting work in decades along the way.

Critic Consensus: BlacKkKlansman uses history to offer bitingly trenchant commentary on current events -- and brings out some of Spike Lee's hardest-hitting work in decades along the way.

From visionary filmmaker Spike Lee comes the incredible true story of an American hero. It's the early 1970s, and Ron Stallworth (John David Washington) is the first African-American detective to serve in the Colorado Springs Police Department. Determined to make a name for himself, Stallworth bravely sets out on a dangerous mission: infiltrate and expose the Ku Klux Klan. The young detective soon recruits a more seasoned colleague, Flip Zimmerman (Adam Driver), into the undercover investigation of a lifetime. Together, they team up to take down the extremist hate group as the organization aims to sanitize its violent rhetoric to appeal to the mainstream. Produced by the team behind the Academy-Award (R) winning Get Out.

The contemporary elements don't necessarily trip you up too much, because you're in the middle of a period piece, and its a great balance that he strikes because we have been waiting for a return of Spike.

The filmmaker rips from the headlines, but the struggles remain the same.

It's just about perfect in balance of tone, and it's easily Spike Lee's best film in years.

A kitchen sink and kaleidoscopic study of cultural and institutional racism in America.

What I especially love is how the movie refuses to offer up any pat or easy answers.

If it had been more artistically rigorous with the slapstick, it could have arrived at Arendt's 'banality of evil', and taken that point home with guns blazing.

Blackkklansman helps Spike Lee finally land in the Best Director field where he deserved a place years ago.

Spike Lee has much more than a roomful of people for his audience and this is his fiery speech.

Terrific performances and fearless storytelling make BlacKkKlansman a searing document that defies the viewer not to react.

Spike Lee definitely knows how to land a punch.

This film couldn't have come out at a more fitting time. It doesn't even try to hide its commentary on the current state of the US administration and GOP. It is accordingly fitting and nevertheless devastating to see the film end with actual clips from the Jacksonville events of 2017 and the presidents' comments. As for the main film about the undercover work inside the KKK in the late 1970s, it's pretty great. While the advertising (and poster) suggested an even crazier premise, it's still pretty fascinating, well done and acted.

An exaggerated look at the turmoil of 1970's urban America (in order to comment on the present-day) seen through the eyes of a hip black cop trying to break the color bar in one of Colorado's police departments. For taking in as much as it does regarding subject matter it is to be commended, but the whole train rides on the ever-so-thin bon mot that black people who can affect white speech patterns possess a comic one-upmanship - which the piece cannot maintain. Put this down to a mighty effort that unfortunately fails.

With this well-deserved answer to The Birth of a Nation, Spike Lee tells us a curious story using plenty of humor, conviction and style while making a necessary parallel between those events from the 1970s and the horrific resurgence of racial hatred today in Trump's America.