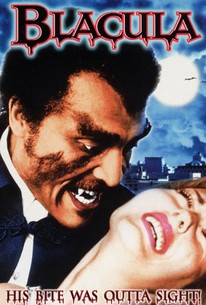 Advertised as the 100th production of American International studios, Blacula stars actor/singer William Marshall in the title role. An 18th century African prince, Blacula is transmogrified into a vampire while visiting Transylvania. Two centuries later, he rises from his coffin to wreak havoc in the Watts district of Los Angeles. Blacula's particular target is Tina (Vonetta McGee), whom he thinks is the reincarnation of his long-ago lady love. Thalmus Rasulala assumes the "Van Helsing" role as the vampire hunter who can't convince the authorities to cooperate. Yes, that is the same William Marshall who later played "The King of Cartoons" on TV's Pee-wee's Playhouse. A sequel, Scream, Blacula, Scream!, appeared not long after.

The placement of an old-fashioned Dracula in a modern black neighborhood is a great idea, but amateurish production leaves Marshall stranded in the film.

William Marshall portrays title role with a flourish and gets first rate support right down the line.

The film remains a lifeless reworking of heroes versus vampires with soul music and a couple of good gags.

Anybody who goes to a vampire movie expecting sense is in serious trouble, and Blacula offers less sense than most.

The film possesses a lively sense of humor and is very much a product of its time, but those seeking PC comfort cinema had best steer clear.

Blacula is beautiful, a totally entertaining movie that is not only a successful satire... but also provides a number of genuinely terrifying moments.

Shakespeare thespian William Marshall has the title role, and excels in it.

Blacula itself is no joke and is, in fact, a legitimate and even dignified horror film with terrifying scenes and enduring moral questions.

If its false vampire teeth are sometimes slipshod, the beats of its stake-targeted heart of darkness flash a message that is poignant, tragic and profound.

William Marshall brings considerable nobility to the lead role - no mean feat when you've got patches of hair glued all over your face and keep turning into a giant bat.

It's redeemed somewhat by a cool soul soundtrack and a lead performance by the classically-trained Marshall, who displays a reverence for his iconic role that the filmmakers could have heeded.

A combination vampire movie and blaxploitation movie, which you wouldn't think would be good, but it's actually a very fun movie, and it's one of my favourite vampire movies of the 70s.

While this movie is pretty cheesy and ridiculous (as if the title couldn't make that obvious enough), it's a lot better than it might seem. It came out during the blaxploitation era, and is considered to be a blaxploitation horror film, but much of the campy and stereotypical elements that are typical of those films aren't really found here. They are there a little bit, but the most sterotypical campy thing here are the gay interior decorators. This isn't a "jive vampire" like one might expect. Instead ,things are mostly played straight. Instead of being "Dracula's soul brother" this is a serious take on the vampire legend, trying to mix the gothic elements of Hammer horror films with contemporary (1970s) African American culture. Despite some bad writing and some iffy acting, this is a fairly successful film. I am biased, and yeah, this film is heavily flawed, but it's pretty damn entertaining. It also tries for a bit of subtext, which is always appreciated. This could have been a lot better, but it's far better than the later attempt at a black vampire that was the woeful "Vampire in Brooklyn". Give this one a shot: there's a good mix of fun, romance, and horror, and some surprisingly well done sequences. Don't expect it to be a masterpiece, but don't let preconceived notions prevent you from seeing this, either.

This is a very cool movie and deserves its cult following. This lively and amusing hybrid of blaxploitation and low-budget horror in which African Prince Mamuwalde ( William Marshall) goes to visit Count Dracula (Charles Macaulay), seeking his support in ending the slave trade. ( I wasn't aware Dracula was involved in the slave trade?)However, the twisted Count decides to curse Mamuwalde with the trait of vampirism. A few centuries later, Mamuwalde rises from his coffin in contemporary Los Angeles, becoming fixated with Lisa (Vonetta McGee), the reincarnation of his long-ago bride, Tuva (also played by McGee). Tracking him is determined Dr. Gordon Thomas (an engaging Thalmus Rasulala), a Van Helsing variation who doesn't take long to realize that he is dealing with a strange situation. Marshall, blessed with an effortless air of dignity and a deep, rich voice akin to that of James Earl Jones, is a good choice for the lead. McGee and Denise Nicholas are attractive co-stars who do more than just provide decoration. They are both very appealing. Canadian legend Gordon Pinsent is good in the role of Thomas's colleague. One welcome touch is the casting of legendary Hollywood character player Elisha Cook as a hook-handed coroner. The film itself is fun, a spirited, urban African American spin on the traditional vampire story. It's not what I would consider scary at all, but it delivers a few good jolts, is paced well, and is generally hard not to like. The music is good, including some show-stopping on screen performances by The Hues Corporation. "Blacula" is basically in a nutshell solid, infectious entertainment, and worth a look. Followed by "Scream Blacula Scream" the following year.

What Blacula lacks, it makes up for by being a heartfelt and serious attempt at being a horror movie, not simply a blaxploitation movie (no drug subplot, pimps, not much jive-talking, etc.) Instead, Blacula barely skirts blaxploitation, and is set much more soundly in the generalized exploitation era, or the realm of cheesy spin-offs of popular franchises. In a nutshell, really it's just a vampire story, albiet of one desperately in love. Blacula, despite it's flaws, manages to deliver an entertaining experience on its pretty sub-standard plot, acting and dialog by, well, exploiting its niche.