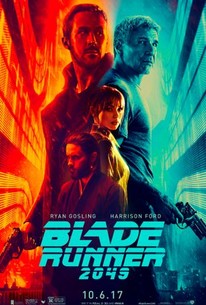 Critics Consensus: Visually stunning and narratively satisfying, Blade Runner 2049 deepens and expands its predecessor's story while standing as an impressive filmmaking achievement in its own right.

Critics Consensus: Visually stunning and narratively satisfying, Blade Runner 2049 deepens and expands its predecessor's story while standing as an impressive filmmaking achievement in its own right.

Critic Consensus: Visually stunning and narratively satisfying, Blade Runner 2049 deepens and expands its predecessor's story while standing as an impressive filmmaking achievement in its own right.

Thirty years after the events of the first film, a new blade runner, LAPD Officer K (Ryan Gosling), unearths a long-buried secret that has the potential to plunge what's left of society into chaos. K's discovery leads him on a quest to find Rick Deckard (Harrison Ford), a former LAPD blade runner who has been missing for 30 years.

If every new film made today is to a greater or lesser degree an echo box of past possibilities, what's notable is how much Villeneuve gives those echoes room to breathe and to be new.

In the end, for all its pleasures, it's difficult to view Blade Runner 2049 as anything but an elaborate echo of the original, neither true sequel nor reboot, unclear of its own identity.

The film dares to be ambiguous, but ambiguity is a bad fit with the current critical mood that art must be prescriptive rather than reflective.

On its own merits, Blade Runner 2049 is a very strong film; as a sequel, it's nothing short of brilliant.

Watching Ford and Gosling onscreen together suggests an evolution of masculinity within the films, one that exists along a continuum of noir leading men, from those failing to hide their tenderhearted nature to the solemn figures who make stoicism an art.

This is a rare sequel that enhances, arguably even surpasses, the mastery of its original. Harrison Ford dubbed it 'a cathedral' of a movie and he's right - this is one to worship.

It's immaculately constructed, full of true wonder, and keeps you under its spell all the way to the very end. In some ways, Blade Runner 2049 even surpasses the original.

Heady science-fiction fans, this episode is for you.

A new chapter. A triumph. A cinematic miracle.

Unlike the original film, where the "romance" feels like a product of Deckard's dehumanized relationship with Replicants, the romance between Ryan Gosling's K and Ana de Armas' Joi, both machines, feels real and keeps the film intriguing.

A skilfully made movie that works as a companion piece to Scott's film and as a detective mystery.

Deliberate in its pacing and world-building, the follow-up to Ridley Scott's dystopian vision of Los Angeles uses breathtaking cinematography, impeccable production, and a gripping story to make our second visit even more revelatory than the first.

Ridley Scott's fingerprints are all over this; the atmosphere generated reminded me of the movie Prometheus. Plotting was terrific. Harrison Ford and Ryan Gosling are both heartbreaking in it.

For fans of the original Blade Runner, an Easter Egg of a film, a glorious gift for loyalty, for waiting for a follow up. For ... the rest of you, a nice and interesting sci-fi expedition into the consideration what constitutes a soul? Is it a merely physical essence? A factor of being sentient? And what difference does one make? What's the big deal?!? Or ... we follow a robot, whose job is terminating other robots, who curiously begins to ask itself the same questions in a results only oriented future unconcerned as you, Dear Reader, with the answers. Sci-fi greatness awaits.