Blame It on the Bellboy1992 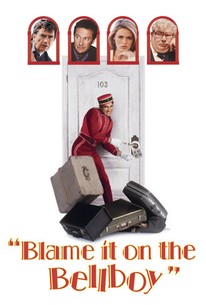 Blame It on the Bellboy Photos

Brevity may be the soul of wit, but that doesn't make the 79-minute Blame It on the Bellboy any funnier. Orton (Dudley Moore) is an ambitious real estate agent. Horton (Richard Griffiths) is a middle-aged married man looking for extracurricular activity via a dating service. And Lawton (Bryan Brown) is a professional hit man. Orton, Horton and Lawton all check into adjoining rooms at a posh Venetian hotel. Bellboy Bronson Pinchot, whose grasp of the English language is virtually nonexistent, delivers the wrong messages to the three men. That's why Orton is trying to sell a valuable piece of property to a roomful of mafiosi, Horton is "paired up" with an unwitting female real estate broker, and Lawton is preparing to rub out a hapless dating-service subscriber......Written by director Mark Herman, this old-style doorslamming farce might have passed muster as a dinner-theater attraction, but on film it comes across as strained and tiresome.

Ronnie Stevens
as Man on Plane

Critic Reviews for Blame It on the Bellboy

A lightweight ensemble comedy in which ingenious plotting is let down by weak dialog and stop-go direction that largely squanders the talent involved.

There's more method than inspired madness to "Blame It on the Bellboy," but this scenic, fast-paced farce by a first-time British director is still effervescent fun.

"Blame It on the Bellboy" is a farce in the grand British tradition, set on the Grand Canal of Venice. And that, alas, is pretty much the sum total of what is grand about it.

It's lowbrow humor for the masses, and as such, it succeeds quite well.

Writer/director Mark Herman does a nice job of setting up the misadventure and then sitting back and letting it play itself out.

As it bounces unmerrily along, Blame It on the Bellboy is half-intriguing, but rarely humorous.

Can I instead Blame it on Mark Herman?

Blame it on the screenplay.

Writer-director Mark Herman, with his first film, would like to deliver a throwback to the knockabout sex farces of old, but his touch is too heavy-handed and his jokes lack imagination.

Audience Reviews for Blame It on the Bellboy

Blame It on the Bellboy Quotes