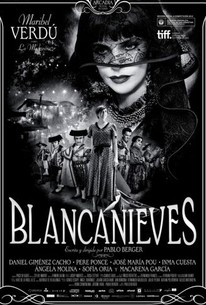 Once upon a time there was a little girl who had never known her mother. She learned the art of her father, a famous bullfighter, but was hated by her evil stepmother. One day she ran away with a troupe of dwarves, and became a legend. Set in southern Spain in 1920s, Blancanieves is a tribute to silent films. (c) Cohen Media Group

Sergio Dorado
as Rafita
View All

Filmed in glamorous black and white, all dialogue furnished via intertitles, the movie is less a pastiche than The Artist and, at least initially, it's not as precious.

The pleasure resides as much in the layers upon layers of references to film history, to Spanish history, to fairytales, to Hollywood entertainment, as it does in its story of a little girl who loses everything.

It's like watching a gorgeous tragi-comic opera written by Dickens and co-directed by Fellini and Almodovar.

The film is exquisitely shot and Macarena Garcia is achingly gorgeous as the fawn-eyed Carmen/Snow White.

A Spanish take on Snow White that picks up where The Artist left off and shows the full elegance of silent filmmaking.

No film this year will look as swooningly beautiful, its deep-focus monochrome vividly rendered by the cinematographer Kiko de la Rica, and not many will sound as good, either, thanks to a score by Alfonso de Vilallong.

It's not just the people who look great. Most of these compositions look like photographs in an art gallery, yet manage not to forfeit their cinematic immediacy.

if you are an adventurous moviegoer able to fully surrender yourself to a full-on sensory experience then this is very likely one film that will completely sweep you away.

Blancanieves is a strange piece of work, but a precious one, however, so even if it lacks ambition, its integrity and beauty are to be treasured.

A visual spectacle cloaked in a beautiful melancholy, Blancanieves is filmmaking at its finest and a true masterpiece.

The kind of rare cinematic treat that makes the heart beat faster at the recognition of something truly magical in the way that only movies can provide.

Berger has managed to take a tale as old as time and enchant us to the point where we're not only invested in the characters, but there's tension and mystery as well.

An interesting take on the old Snow White legend with beautiful production and costume design.

A matador's daughter is oppressed by her evil stepmother until she escapes and winds up traveling with a troupe of bullfighting dwarfs. Unexpected twists on the ancient legend, bits of macabre humor, and magnificent music and camerawork announce this silent, 20s-styled refashioning of Snow White as a modern masterpiece.

Antonio Villalta (Cacho) is Spain's most acclaimed bullfighter until the day he is gored and forced to retire. When his wife dies in childbirth, he rejects their newborn child, Carmen, who is sent to live with her grandmother. Antonio marries his nurse, Encarna (Verdu), who takes in Carmen following her grandmother's death. She treats the child terribly, forcing her to work hard all day and sleep in a dank room at night. Carmen is forbidden by Encarna to go to the first floor of the mansion but one day she chases after her pet chicken and discovers her father, confined to a chair in an upstairs room. He reconnects with his abandoned daughter, teaching her about bullfighting, but when Encarna learns of this she puts some dark plans in motion. While 'The Artist' homaged the silent era but never really felt like a product of that time, Berger's 'Blancanieves' is much more authentic. 'The Artist's claims to being a "silent" where somewhat false, given the amount of dialogue displayed on title cards and the use of sound effects. Here, title cards are kept to a bare minimum as Berger is so adept at visual storytelling he simply doesn't need them. The only sound present is courtesy of Alfonso de Vilallonga's fantastic flamenco-infused score. The key to a successful silent film is to keep the plot as simple as possible. By reworking a fable known to anyone raised as a child in the western world, Berger is allowed forego narrative details and focus on creating atmosphere, which his film has in spades. Verdu as the wicked step-mother Encarna is one of recent cinema's greatest villains, going so far as to feed young Carmen her pet chicken in one of the film's darker moments. In today's politically correct age of molly-coddling, it's easy to forget just how dark children's fairy tales are, especially those of the Grimm brothers. Like the early epics of Disney, 'Blancanieves' combines this darkness with a level of charm absent from most contemporary children's films, and though it features an attempted rape and some animal cruelty, this is essentially a children's film. It certainly took this reviewer back to a childhood spent on a living room floor falling in love with the black and white horror movies shown on TV every afternoon back in the eighties. At my screening, there were audible groans when critics realized they were in for a silent film. Sadly, in this word-obsessed age where eye contact has been replaced by text messages, 'Blancanieves' will struggle to find an audience. It's a film that requires you to keep your eyes on the screen at all times, anathema to the idiot-phone generation. Their loss is the cineastes' gain.

'Blancanieves'. The lighting, the symmetry, the composition. Just, wow. One of the most beautiful looking films I've ever seen. The flamenco-infused score is rousing, and there's a decent amount of wit, charm and humour.