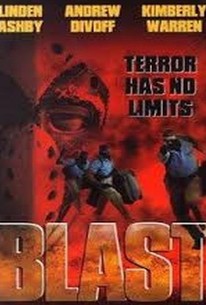 Directed by Albert Pyun, Blast centers around the struggles of a group of would-be Olympic spectators being held hostage by a band of terrorist determined to set off a vast amount of explosives at the 1996 Olympic Games in Atlanta, Georgia. The film featres Linden Ashby, Andrew Divoff, Rutger Hauer, Kimberly Warren, and Tim Thomerson.

The biggest positive and only true spark of life to Blast is the presence of Rutger Hauer.

So here we have 'Die Hard' in an Olympic stadium, well its actually based around what could of happened if the Atlanta Olympics (1996) had come under siege from the terrorist attack which the FBI actually stopped in reality. So an actual interesting concept from Mr Pyun this time. Despite that interesting plot it does come across as 'Die Hard' in a stadium, 'Ashby' is the sole hero/janitor who can save everyone and his wife in this complete plot rip off that Bruce Willis vehicle. Of course the difference here is the acting is bad, fights and action are poorly executed and its clearly more of a TV film as the whole stadium consists of about 20 people not including the terrorists. The way Divoff tries to plays it so hard, cool and serious as the baddie top dog is hilariously corny plus the sight of Rutger Hauer with a weird Native American Indian style haircut complete with braids is pretty peculiar. Yep its the usual all star cast of B-movie regulars, or I guess you could say cult movie regulars at a push. This could of been kinda cool had it been taken down a serious route but I guess Pyun couldn't help himself.