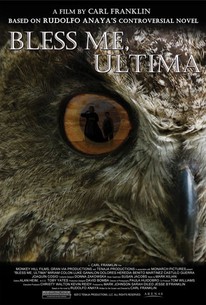 Director Carl Franklin (One False Move, Devil in a Blue Dress) helmed this adaptation of Rudolfo Anaya's controversial novel about a young boy and the enigmatic healer who opens his eyes to the wonders of the spiritual realm. New Mexico: the early '40s. As the entire world is plunged into war for a second time, Antonio Márez (Luke Ganalon) grapples with the harsh realities all around him. His life is forever changed by the sudden arrival of Ultima (Miriam Colon), a woman with supernatural healing powers, who has come to his family on a mission of kindness. As Ultima inspires Antonio to question authority and see the world from a new perspective, the young boy witnesses a series of seemingly impossible events that have a profound impact on his concepts of divinity and fate. ~ Jason Buchanan, Rovi

News & Interviews for Bless Me, Ultima

View All Bless Me, Ultima News

Critic Reviews for Bless Me, Ultima

The lyrical book is filled with touches of magical realism. On the other hand, the movie is sorely lacking in both magic and realism. It's all very empty and blah.

An offbeat slice of Americana will intrigue thoughtful moviegoers.

Theater firebrand and big-screen presence Miriam Colon portrays Ultima with a minimum of fuss and a gorgeous supply of elder authority.

Writer-director Carl Franklin offers up a tone of heightened reverence that weighs down the material, but there are small, lovely moments when the magic realism approaches the magical.

Although Bless Me, Ultima can feel a bit overstuffed, it's an honest and naturalistic kids' story about growing up Mexican-American.

It wants to be something grand, but its ambition far exceeds its reach.

What sounds like a philosophically intriguing premise doesn't quite translate in this bluntly conditioned film treatment that butchers a Bildungsroman into a parody of good vs. evil.

No doubt there will be future generations who will turn to the film for "help" with their book report, but will be surprised to discover themselves enjoying it.

... bogged down by its deliberate pace, reliance on Catholic symbolism, and its one-dimensional characters.

[Director Carl] Franklin is sensitive to the way boys interact, bump chests, bicker, and bond-just as he is to how adults justify their hypocrisy and excuse their failures.

Audience Reviews for Bless Me, Ultima

While this isn't an outstanding coming-of-age film, it is a very intelligent story about this boy who loses his religion. I don't mean to say that the movie is strictly anti-religion, it's just a movie that asks questions about it and Antonio's inquisitive nature drives him to understanding the universe and why evil happens in it and why would god allow such terrible things to happen. This might be a question that the religious would try to brush away by saying that he gave us free will and that this is the work of men. And that's a valid point, I would never disagree with that, but at the same time if all of this is god's creation and it's all a part of his divine plan then he should also be held responsible, right? I don't mean to get into a debate about this, I'm just pointing out why Antonio, even at his young age, would be curious about these things and the effect they have on humanity. So, in that regard, I found the movie to actually be quite insightful and intelligent. If there is a problem is that Ultima was the person that made Antonio question all these things, she pretty much sent him on a life-changing experience. Yet, we never got to see much of Antonio's and Ultima's relationship. We got the important bits, but I never really felt as if that was enough to create this bond that will still live on even after Ultima's death. The acting's more than solid, sometimes Luke Ganalon, who plays Antonio, leaves a lot to be desired but he's good overall and Miriam Colon is incredible here because she commands a certain respect that the character of Ultima required, and she's certainly the highlight of the film. The story is strong but not outstanding, I think it's probably a better read than it is a movie. And that's saying something because I thought this film was pretty damn good with a magical charm about it. It asks some interesting questions and it has a great deal of insight. It's certainly not a perfect film, but it's pretty damn good nonetheless.

Bless me Ultima is based on Rudolfo Anaya's widely read and critically acclaimed 1972 novel. A major work of Mexican-American literature in classrooms, it has been contested at times due to its adult language and sympathetic view of the occult. Although the themes of religion vs. mysticism are addressed, the conflict doesn't really resonate. Actress Miriam Colon is appropriately mysterious and benevolent as Ultima but young actor Luke Ganalon is vague as a character. Given to blank stares as events happens, he fails to truly engage as our lead protagonist. His spiritual development is key to the narrative, but his odyssey seems kind of perfunctory. I suspect the story will probably resound more with people who have read the source text and can fill in the book's deeper handling of Antonio's cultural and ideological struggle. This coming-of-age tale is pleasant enough, but it could've been so much more. fastfilmreviews.wordpress.com