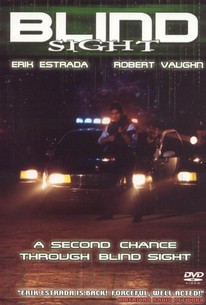 Erik Estrada stars in this straight-to-video sci-fi-action flick featuring the former CHiPs man as a blind psychic cop investigating the killing of a highly ranked government scientist. L.A.P.D. detective Frank Moreno (Estrada) is a top cop that gets a little too close to a murder investigation which lands him in a hospital bed after being horribly electrocuted. Waking up, Frank realizes his sight is gone, but in its place are extraordinary ESP powers. Sightless, the detective reopens the case and is soon on the run from a national security agent (Robert Vaughn) and his team of corrupt government agents who hope to un-coif his hair and silence his psychic powers before their plan is destroyed.

There are no critic reviews yet for Blind Sight. Keep checking Rotten Tomatoes for updates!

There are no featured reviews for Blind Sight at this time.