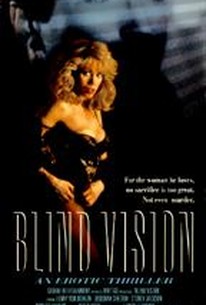 Shuki Levy, best known for his work on behalf of the Saban Entertainment animated-cartoon firm, directs a group of "live" performers in Blind Vision. Lenny Von Dohlen stars as nerdish mail clerk, who worships Deborah Shelton from afar. Emulating Hitchcock's Rear Window (or is it DePalma's Body Double?), Von Dohlen watches his dream girl through a highpowered lens. When one of Shelton's boyfriends turns up dead, Von Dohlen is sucked into a vortex of intrigue. Don't be lulled into the sense of deja vu in the early reels; this one's got quite a few tricks up its sleeve. Written by Levy and his frequent Saban collaborator Winston Rickard, Blind Vision costars Robert Vaughn (as "Mr. X"!), Ned Beatty, and Louise Fletcher; the film was lensed on location in Norfolk, Virginia.

There are no critic reviews yet for Blind Vision. Keep checking Rotten Tomatoes for updates!

There are no featured reviews for Blind Vision at this time.