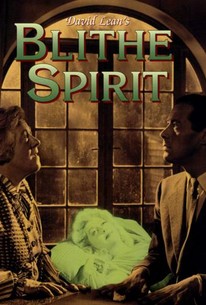 The Noel Coward/David Lean combination which turned out such dramas as Brief Encounter and This Happy Breed sets its sights on the viewer's funny bone with Blithe Spirit. Rex Harrison plays a novelist, newly married to straight-laced Constance Cummings. Via a seance, Harrison accidentally summons the spirit of his first wife, Kay Hammond. Believing that Hammond wants to ruin his marriage, Harrison enlists the services of local medium Madame Arcati (Margaret Rutherford) to exorcise Hammond's spirit. She fails, and in time, Harrison's second wife is killed; now he has two playful spirits on his hands! Technicolor is used throughout Blithe Spirit, with the ghosts' shimmering paleness providing contrast to the plain, everyday colors of Harrison's conservative country home. Blithe Spirit was later transformed into the Broadway musical +High Spirits, with the original script bent out of shape to turn the character of Madame Arcati (played by Beatrice Lillie) into the leading role.

Inasmuch as this is largely a photographed copy of the stage play [by Noel Coward], the camerawork is outstandingly good and helps to put across the credibility of the ghost story more effectively than the flesh and blood performance does.

Nifty special effects for the time, and plenty of Coward's inimitable wit and repartee.

Worth it just for Margaret Rutherford as a sort of girls' school gamesmistres-style psychic!

Passably good, but it should have been better, what with Rex Harrison, Constance Cummings, and Margaret Rutherford reading the Noel Coward lines.

May be a trifle, but it's a glorious trifle, and features one of the great comedic roles in English theatre - the medium Madame Arcati, here memorably embodied by a deliciously batty Margaret Rutherford.

Here is another brilliant demonstration that Coward's sense of cinema is as shrewd as his sense of theatre.

The supernatural ménage of wartime England, staged by David Lean as an elegant fissure between the clipped precision of aristocratic manners and the great unknown beyond the drawing-room

... a lightweight comedy built on witty remarks and upper-class smugness (which Rex Harrison so perfectly embodies), but comedy is not Lean's strong suit.

Blithe Spirit is beloved by so many people that I feel like a curmudgeon handing it a mixed review. But when it comes to supernatural comedies starring Rex Harrison, I much prefer Joseph L. Mankiewicz's 1947 The Ghost and Mrs. Muir.

While Coward's witty dialogue and pungent take on the mores of the British upper crust can't help but elicit some smiles, as a whole Blithe Spirit feels like a film that is just going through the motions.

Considering the strength of the source material, its surprising the film feels so stale. The cast is alright, but one gets the sense that Lean wasn't that invested in directing this movie.

My final David Lean, Noel Coward adaption I viewed was Blithe Spirit. I fell in love with this movie. There's no paranormal movie quiet like this. It's elegant in humor and moves quickly. There are no scares, it's more in depth on the idea of the other world, and a humorous view of how life is after you die. David Lean morphed the dead with the living, when an estranged wife comes to "visit" her husband and his second wife. She terrorizes the family through this, and a quote brought up early in this movie really summarizes it well. " It's discouraging to think how many people are shocked by honesty and how few by deceit". Not only is it a great line but it is perfect in the film. Harrison, Cummings, and Hamond have great on screen chemistry, making this an amazing feel good comedy.

Fun filled and witty this is well acted by all and breezily directed but the whole thing is stolen by the wonderfully dotty Margaret Rutherford.

A comedic triumph for Lean. Once again he and Coward make a terrific pair. Cowards words sparkle on screen whilst Lean gives a wonderful visual appreciation, including some excellent (for the time) special effects. The film looks at death, mortality and romance in an incredibly unsentimental way. Always comedic and sometimes harsh and blunt in its delivery. The comedy is also very dark at times but is handled in an rather cheery manner. Like a British stiff upper lip version of Ghost or Death Becomes Her. All the characters have unlikable traits but they soon become endearing and we accept the characters for them. A pleasantly easy watch.