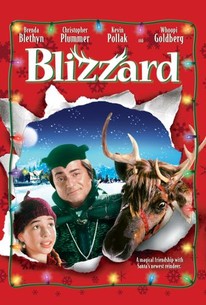 A young girl still saddened by the decision of her best friend's family to move away learns an important life lesson about change from her eccentric aunt in this family-friendly holiday tale directed by LeVar Burton and starring Whoopi Goldberg, Kevin Pollak, Christopher Plummer, and Zoë Warner. When ten-year-old Jess' best friend Bobby moves to another town, Jess is inconsolable. Seeing the young girl's grief at the loss of her friend and hoping to offer some comfort, Jess' aunt Millie (Brenda Blethyn) tells her niece the story of a young girl named Katie (Warner) and her lifelong dream to become a world-famous ice skater. Befriended by former Olympic skating champion Otto Brewer while practicing at an outdoor rink near her home, Katie soon is soon transformed into a world-class skater thanks to the help of her newfound friend. As Katie's father breaks the news that he has lost his job and the family must move to a new home in a new town, a miracle occurs in the North Pole. It seems that reindeers Blitzen and Delphi have given birth to a new baby reindeer named Blizzard, and Blizzard possesses the three powers held by every famous reindeer: the power of flight, the power of invisibility, and the ability to navigate life with her heart. Immediately sensing the sadness of young Katie's loss, Blizzard sets out on her first mission, much to the dismay of Santa's disapproving task-master elf Archimedes.

It will go down like gangbusters with the tykes, but I couldn't wait to empathically navigate myself out of the theatre.

A solid bundle of modest charm.

Blizzard is the "annual fruitcake" of kid's Christmas movies: sticky, ugly, and entirely confusing ... as in "Who thought I'd actually enjoy this fruitcake?"

An instant holiday classic overflowing with the true spirit of Christmas that will bring as much joy on subsequent holiday viewings as it does the first time around.

The Santa story seems lifeless. The child's drama wrapped around it, however, is sweet, involving and is much more authentic.

A cute movie for kids with a life lesson and something fun to watch at Christmastime.

4 Down 26 to go in the quest of 30 Christmas Movies By The Big Day. This film is an excellent family film, nothing that can't be shown to those under 16. Its about a girl whose best friend moves away. Her heart is broken and the only one who can bring her back to al smiles is her Aunt Milley, who shows up and tells us all a wonderful Christmas Tale. Another 4 Star adventure.

Well every Christmas season I seem to stumble onto a new ( well new to me) seasonal movie. Last year being Michael Keaton's Jack Frost. Surfing down the satellite menu at all the Christmas movies to watch the kids stopped me at this one. Let me begin this review by saying major cheese! OK i know its a nicey nicey family type movie about blitzan the reindeer's daughter however c'mon ??? A little too corny for my liking however my kids did enjoy it. I would say a perfect movie if you have daughters under the age of 12 who love figure skating present. Bonus's here was watching Kevin Pollack pull off the role of the miserable tattle tale elf and Whoopi Goldberg voicing Blizzard's voice. Like i said a very nice family movie if you are The Cleavers or the Dudley Do rights but a little too nicey nicey for me.