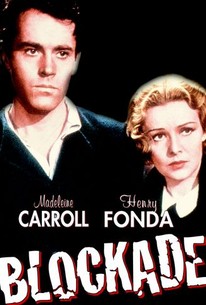 Since the United States was officially neutral in the Spanish Civil War, the struggle of the Loyalists against Franco's forces didn't find much favor in Hollywood; this drama, produced by Walter Wanger, was one of the few films to deal with the conflict, albeit in watered-down terms. Marco (Henry Fonda) is a simple farmer driven from his land by troops of invading soldiers; in an act of defiance, he makes a speech declaring the need for freedom from tyranny, and soon Marco's fellow peasants are following him as their leader. Marco becomes a member of the Loyalist forces, and his strong words and fierce beliefs allow him to rise through the ranks and become a key member of the struggle. While stationed in a city under blockade, Marco becomes acquainted with Norma (Madeleine Carroll), who serves as a spy for armies allied with Franco; her sympathies are less with his policies than for the safety of her family, who live in an occupied territory. Despite their differences, the two become close when they're trapped in a building during a bombing raid; eventually Norma finds herself swayed by Marco's impassioned call to stop the murder of the innocent people of Spain. While producer Wanger was one of the few people in Hollywood who felt strongly enough about the situation in Spain to put it on film, the resulting picture doesn't say much about the specific political issues involved in the fight against Franco, and the troops Marco and his men encounter wear uniforms designed not to resemble those of any actual countries, for fear of offending nations that sided with Franco. Despite this, Blockade was deemed a strong enough leftist tract to be used against screenwriter John Howard Lawson when he was blacklisted in the 1950s.

William B. Davidson
as Commandant

On the surface it is a good, excitingly handled spy film. But underneath the narrative it presents an eloquent and brilliantly pictorialized plea against modern warfare.

Set against the Spanish Civil War, Blockade was one of Hollywood's first anti-fascist dramas, which back in 1938, was considered a bold act; director Dieterle's future career suffered because of the film's politics.

Proof that not all movies from the Hollywood Golden Age were classics. Over emphatic and artificial with an overwrought performance from Henry Fonda. Madeleine Carroll is beautiful but her part doesn't make a lot of sense.