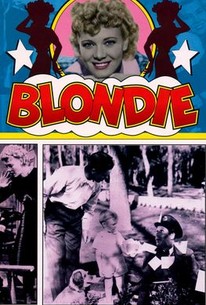 When Columbia Pictures secured the movie rights to Chic Young's popular comic strip Blondie, the studio executives probably never imagined that the ensuing "Blondie" series would last for 12 years and 28 episodes! Part of the series' charm was Columbia's wisdom in casting the ideal actors for the leading roles. Penny Singleton dyed her hair blonde to step into the role of Blondie Bumstead (after Shirley Deane bowed out due to prior committments); Arthur Lake landed the role of a lifetime as sensible Blondie's bumbling hubby Dagwood (in the original strip, of course, it was Dagwood who was sensible and Blondie who was scatterbrained); and 5-year-old Larry Simms did a masterful job as the Bumstead's son Baby Dumpling (aka Alexander), literally growing up before our eyes over the next dozen years. Not as farcical as later entries, the initial Blondie film is a gentle, even-keeled situation comedy, aiming for chuckles rather than bellylaughs. It doesn't take long for poor Dagwood to get into trouble with his apoplectic boss J. C. Dithers (wonderfully played by Jonathan Hale), who fires our hero halfway through the second reel. Ruminating over his troubles in a hotel lobby, Dagwood strikes up a friendship with affable C. P. Hazlip (Gene Lockhart), never realizing that this is the same Hazlip whose account the Dithers Construction Company has been trying to land for the past several weeks! But before a happy ending can be realized, Blondie and Dagwood undergo a series of misunderstandings, culminating with Blondie tearfully storming out of the house (which has already been stripped of its furniture by the finance company!) Blondie was an immediate hit with filmgoers and fans of the strip alike, convincing Columbia that it had a winning property on its hands and spawning sequel after sequel after sequel. Available for years only in its TV version, which obliterated the opening credits in favor of a jazzier "sitcom" opening and tacked on a few minutes of "coming attractions", Blondie has recently been restored to its original form on videotape and cable TV.

Daisy the Dog
as Himself

Willie Best
as Porter
View All

There are no featured audience reviews yet. Click the link below to see what others say about Blondie!