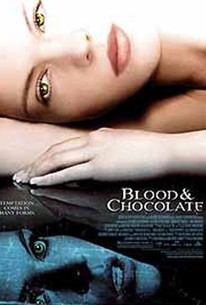 Iron Jawed Angels director Katja von Garnier and the producers of Underworld team to adapt author Annette Curtis Klause's tale of a teenage werewolf who must choose between love and loyalty to the pack when she falls for a handsome young human. Vivian Gandillon (Agnes Bruckner) is a 19-year-old girl living in modern-day Bucharest. After spending her entire life running from the truth, Vivian is forced to come to terms with her lycanthropic origins when her growing affections for a visiting American artist threaten to reveal her family's dark secret. For centuries, Vivian's family has been involved with an ancient secret society. Now, in order to be with the one she loves, Vivian will be forced to betray an age-old vow that could bring about the downfall of her entire race. ~ Jason Buchanan, Rovi

Pete Lee-Wilson
as Krall
View All

Critic Reviews for Blood and Chocolate

The city ends up being more interesting than the story or characters. Too bad we can barely see it.

Setting up a conflict between humans and lycanthropes, this inelegant adaptation of Annette Curtis Klausse's teen novel wants to be a tragedy, with the "loup garoux" - that's a fancy term for werewolves - struggling for survival in present day Romania.

If it came to a wolfbitch fight, the girls from Ginger Snaps could rip up the entire werewolf race from Blood and Chocolate without mussing their fur.

Most of the dialogue verges between the hormonally overwrought and the insipid.

The ads for Blood and Chocolate proudly declare that it's 'from the producers of Underworld', as if that's something to brag about.

A far cry from such sneakily subversive werewolf-sex tales as The Company of Wolves or Ginger Snaps, this pallid little picture is all Lost Boys posturing by way of the sublimely ridiculous Covenant.

A bland, forgettable, and sub-par teen marketed horror cash-in that bored me to tears...

A truly laughable movie, one that takes itself far too seriously without ever taking a moment to consider who its audience is -- or if it even has one.

...the film's positives are ultimately outweighed by its negatives.

Audience Reviews for Blood and Chocolate

I think Blood and Chocolate is purposefully ugly to convey with the film's overall mood and I enjoyed the fact that in this werewolf film there was more development of character. There wasn't an explosion of CGI and a lot of interesting things went on in the film. I came out satisfied. I was entertained.

This movie really stands apart from others of its genre--that is, werewolf stories. It's intelligently made and there is an actual plot to follow. The acting is convincing, and thankfully the change from man to wolf is beautifully executed. Some great action. Some great romance. Some really great Hugh Dancy...nuff said!

I had read the book before and was of course dissapointed that this adaptation wasn't exactly faithful. However as an independent film it was pretty average. The story line was a bit original since you've never quite seen this kind of werewolf film before and the action and special effects were quite good. The acting I wasn't exactly crazy about especially Dancy's performance. All in all, it could've been better.