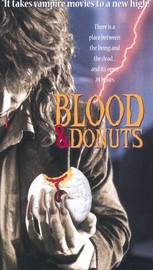 Caroline W
November 21, 2013
An odd but acceptable Vamp movie with comical moments that you're not sure were meant to be funny. Not for the tween group that is looking for a Twilight type movie, this is far from it. This is campy to say the least, but that's what makes it fun. Enjoy it for what it is.

Kyle A
½ October 27, 2013
If I were to have seen "Blood and Donuts" in 1995 I would have said it was outdated, because it takes all of its cues from late 80's films like "They Live". However, I found its unusual world interesting, and its take on vampires different enough to keep me invested throughout the film. It's not highly memorable, but is different and was worth the watch.

Mr. Magic M
½ September 2, 2013
Stupid-Good Movie: Seldom does Hollywood's easel of superfluous story-replays, succeed in escaping viewers' acumen. This movie is such a relief from the dull rehashing of tales masquerading as innovative brilliance, arrogantly assuming easy audience acceptance. This story is truly imaginative. This movie is a fun frolic through a donut shop - by a vampire - and some donut shop girl. Is this your typical poorly written script trying to come across as serious scary-theater - - - NO Way. It's poorly written and not trying to fool anyone. Are the actors trying to be serious? You have got to be kidding me. NO Way. Come on! This is a story about donuts and vampires. This flick is cheese with a capital 'C'. In no way are they trying to hide the cheese - it is melted all over the edges. There is no quasi-serious-actor - the flick is one big joke - and the cast is very well aware of it. With all this being said, I enjoyed this bit of entertainment - most brilliant in every aspect. Even as background noise, 'Blood and Donuts', was well worth the time. Rent it - watch it - and devour it.

Lee M
½ November 1, 2012
A quirky Canadian curiosity that is an oddly unsatisfying film, where the elements of the vampire film and the non-commercial approach of an indie film never adequately congeal together.

Michael Y
January 13, 2011
This is what happens when Canadians make vampire movies. They're unbelievably weird, yet so easy to enjoy. This small budget gem is a guilty pleasure of the comedic side of vampire stories.

Boya has lived on this Earth for centuries, and since the moon landing he's been in a deep slumber. But after 25 years he is awakened, and now he has to protect his newfound friends from the mob, and his ex. This dark comedy is pretty low budget and pretty bad at times, but it's irresistible. What makes it so irresistible is Gordon Currie's dramatic, yet funny impersonation of the physicality of Nosferatu, and Justin Louis's weird accent. The story isn't much, but it's good enough.

The thing about Canadian filmmakers is that the use little, but deliver a lot. The director Holly Dale uses a lot of unique filmmaking styles to make this movie even more appealing. From the over use of Dutch angles, creative camera shots, and a very good job with the lighting, this movie looks a lot better than it could have been. There are definitely a mixture of creative shots that, even though this movie is virtually unheard of, once you watch it, those scenes will become memorable. And if the style isn't enough, this movie has a great soundtrack, including The Platters's 'Twilight Time'.

It pays off to watch such unheard of movies, because there are a few gems out there. Blood and Donuts isn't much, but with some funny preformances and a special appearance by David Cronenberg, this vampire flick is still a hell of a lot better than Twilight.

Mike C
½ May 2, 2009
Whoever wrote the review for this site should actually watch the movie first, or at least pay attention. Boya did not go the the graveyard in search of blood. It was to retrieve items buried there prior to his nearly 30-year nap. Get it right.
This movie was different. That's not just being polite. It happens to be very true. This is far removed from your regular vampiric escapade. The blood sucking hero, Boya, is characterized as somewhat ashamed and disturbed by his affliction. He is also quite unwilling to pass it on to even those would-be victims who demand it.
It was also very different in another regard. I have spent most of my life recognizing settings in and around Toronto as they are being passed off as various, generally American, cities. Blood and Donuts was not only filmed in Toronto -- it even admits it. They pass around and use easily recognizeable Canadian money and don't try to hide the easily-recognizeable skyline. (Unlike one of the Police Academy movies where they jet ski off Florida with the CN Tower visible in the background)
If there is anything that bothers me, it is that the movie looks cheap. Probably because it was. Internet Movie Data Base reports the budget at about $350,000 CDN. That wouldn't cover the daily buffet on many productions. Music, to my personal distaste, is from the 50s. Presumably because it cost little or nothing to license. They could really have spent less on smoke machines and sprung for a little Motley Crue. Kickstart My Heart comes to mind. (Watch the movie and you'll know why.)
Seedy settings in some of the oldest parts of Toronto's industrial section were perfect, however. While the donut shop at the center of the film was no Tim Hortons, what could be a more Canadian setting?
Helene Clarkson is a likeable heroine -- even with a pair of caterpillers on her brow. Justin Louis plays another dufus cab driver that never seems to work unless he is picking up people involved in the movie's plot. (I'm a dufus cab driver and wish I could make a living that way)
Unfortunately, the most interesting cast member portrays one of the dullest characters. Horror master David Cronenberg is about as menacing as Fozzy Bear as the crime boss of two seriously inept mobsters. But when they cross paths with Boya its funny and unsettling at the same time.
Equally unsettling is Fiona Reid as Rita, the gilted lover we are lead to believe was the reason Boya exiled himself back in the 60s. She is party to one of the best moments in the movie however, when Boya continues to refuse her the gift of life eternal. "Don't believe everything you read."
You can, however, believe this. Blood and Donuts is far from the worst movie out there. If you like Vampires, this has to be in your collection. It will remain in mine.

Garrett T
½ January 17, 2009
Enjoyable Canadian-made vampire comedy with David Cronenberg as a gangster! Lots of fun and well worth a watch.

Mary
May 28, 2008
Wonderful over-looked vampire film with an outstanding Canadian cast! Gordon Currie is Boya; and I can not listen to The Platters' classic, "Twilight Time" without thinking of this film! If you're a vampire fan, or a Gordon Currie fan, and you find this film, latch on to it!

David C
April 27, 2008
B&D is a sublime, surrealist comedy of the human spirit. A romantic and yet harshly realist presentation of the vampire character; a somewhat unique one as well. It's about possibilities, choices and living with yourself as you truly are. Thought provoking, with an array of eccentric characters but yet so well done that just for a moment you could imagine this going on just down the street.

Another rare treat from the bombardment of unoriginal, market-driven dribble that pervades North America's film industry. This is a Canadian film, a country which really doesn't have a sizable film industry, and opens up the doors to good things you'll rarely find at your local Blockbuster.

I won't ruin the ending for you, but it's perfect.