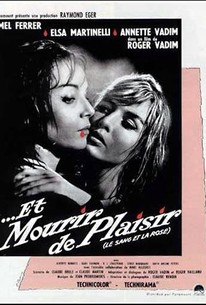 Previously filmed in 1932 as Vampyr, Sheridan LeFanu's classic psychological horror tale was given a second go round in 1961 as Blood & Roses (Et Mourir de Plaisir). While Carl Theodor Dreyer concentrated on mood and suspense in Vampyr, Blood & Roses director Roger Vadim goes directly to the jugular, so to speak, with generous doses of eerie eroticism. Annette Vadim plays Carmilla, who upon learning that she had a vampire ancestor becomes obsessed with finding out even more. Soon Carmilla has succumbed to the siren song of vampirism, and cannot quench her insatiable thirst for human blood. The lesbian subtext in the LeFanu original is played out con brio by Vadim-though not in the heavily bowderlized version made available to American audiences in 1962. Blood & Roses was subsequently remade as The Vampire Lovers and The Blood-Spattered Bride. ~ Hal Erickson, Rovi

Edith Peters
as The Cook

Blood & Roses [is] one of the most gorgeous and visually arresting vampire movies I have ever seen.

There are no featured audience reviews yet. Click the link below to see what others say about Et mourir de plaisir (Blood and Roses)(To Die with Pleasure)!