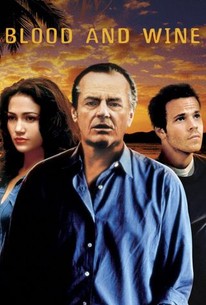 Wine merchant Alex Gates seems to have it all: a fancy shop, a beautiful wife, Suzanne, a sexy Latin mistress, Gabriella, and a hot car. He enjoys the best vintages of the goods he sells. In truth, Alex Gates' finances are stretched to the limit, his marriage is in a shambles and his relationship with his stepson Jason is toxic. Alex's business caters to a wealthy clientele, whose riches prove all too seductive: particularly a certain $1 million diamond necklace. Alex joins with Victor Spanksy, an emphysemic safe-cracker, in a conspiracy to steal the necklace. Rather than the key to their freedom, the hot necklace proves to be the beginning of the end. While Alex is seduced by the jewels, his stepson is both sucked into the crime and drawn to Gabriella, unaware of her liaisons with his stepfather. As their passion grows, she is increasingly torn by the two of them, and by the temptations of money and love.

Thom Christopher
as Jeweller No. 1

Robert Catrini
as Rick
View All

News & Interviews for Blood and Wine

View All Blood and Wine News

Critic Reviews for Blood and Wine

An engrossing thriller - and one sparkling with intelligence, with the surprising twists grounded in credible human behaviour.

When Bob Rafelson decides to get nasty, he really means it.

Rafelson is so true to his sour vision of crime, deception and a rottenness at the core of our natures -- he's as cheerful as a Jim Thompson potboiler -- that we never get a chance to like or care about his characters.

Nicholson is good, but the movie isn't.

The movie's own payoff is compelling enough, but the project has a weightless feel that limits involvement. Better you give it an hour-and-a-half on video someday, surrounded by wine and snacks.

As lifeless as a flat wine.

A noir thriller about greed.

Rafelson shows that he can't handle noir themes as easily as the real masters of the genre.

Bob Rafelson sends this movie out like a hissing flare from the island of the nearly-forgotten, and if justice had prevailed, moviegoers would have answered the call.

The director benefits from a powerhouse duo in Nicholson and Caine. It's like watching two cats fight for the same mouse, because both characters are corrupted to the bone.

Audience Reviews for Blood and Wine

Not even a reminder about how gorgeous J-Lo was in the nineties can save this film. Nicholson and Caine are wasting their time here collecting a paycheque for making nothing out of a B grade thriller.

Honestly, Bob Rafelson should've just not made this third entry in his trilogy of Jack. While there's unsurprisingly great performances from Jack Nicolson and Michael Caine, the performances from Stephen Dorf and an incredibly ethnic Jennifer Lopez completely destroy the movie. The isn't all that unique, but given better talent it could have been a lot more entertaining and worthwhile. While you can certainly go worse, this just doesn't deliver the way that Five Easy Pieces and The King of Marvin Gardens do. It doesn't have anything particularly important to say about the American dream aside from the greed aspect. In the end it's just a poorly done heist movie.

J-Lo can instantly ruin any viewing experience even if shes only in a film for like 10 minutes, which sucks cause shes in a few movies i wanna see. Put all that aside though, its actually pretty good. Stephen Dorff is a great actor and i could probably just watch him look for his car keys and be entertained. J-Lo has one line that sums up how ive felt about her since shes been acting "Baby, you aint that stupid." ".... yes. i am!" CLASSIC.