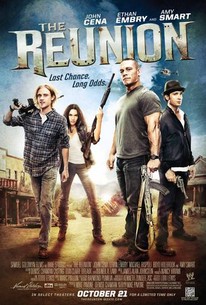 The Cleary brothers, Sam (John Cena), Leo (Ethan Embry) and Douglas (Boyd Holbrook) take dysfunctional families to a new level: Sam and Leo have grown up hating each other and neither likes their juvenile kid brother, Douglas, to whom they've only recently been introduced. The three boys share the same father, but all have different mothers. Their father died a rich man and when they're brought together by their sister Nina (Amy Smart) to learn which one of them will inherit the old man's fortune, they are handed an unpleasant surprise. A requirement of the will is that the three estranged siblings go into business together as bail bondsmen. Their first job takes them into the mountains of Mexico where they encounter a drug lord and uncover a kidnapping plot, masterminded by an embittered entrepreneur (Michael Rispoli) that will endanger them all. -- (C) Samuel Goldwyn

Critic Reviews for The Reunion

What's ironic about The Reunion is that its plot, though it revolves around a kidnapping set in Mexico, seems blind to current events.

The WWE's campaign to turn its brutes into box office deals another tepid hand with The Reunion.

There's one thing to be said about WWE Studios -- they're consistent. Every one of their movies designed to showcase their stable of popular wrestling stars has been a critical and commercial disaster.

If John Cena wants to follow in the footsteps of fellow wrestler-turned-actor Dwayne "The Rock" Johnson, he might want to learn to smile. Or at least to pick better material than "The Reunion."

Frequently ludicrous and cheerfully inept, Michael Pavone's action comedy does manage to eke out a few drops of slapdash charm.

"The Reunion" has no pretensions of originality, and maybe that's just fine.

Pro wrestler John Cena stars in a WWE film about estranged half-brothers compelled to work together to rescue a kidnap victim in this old-TV-style family adventure-drama.

You know what you're getting about five minutes into The Reunion: the kind of movie that trades brains in for guns, muscles, and breasts.

Cena handles rough stuff like a pro, and his poker-faced wisecracking isn't bad. But he probably shouldn't quit his day job.

A split personality action comedy that fails to please either impulse. The action is wan, the laughs hard to come by.

The Reunion takes its time cutting to the chase. Once the inept action does start, however, it can't end fast enough.

The resultant smorgasbord is a misshapen mess, short on humor, tension, or chemistry among its bickering protagonists.

Audience Reviews for The Reunion

The film wasn't bad, but it wasn't great either. I felt like I was watching a TV Show pilot. The film feels like Four Brothers meets The Rundown. One problem that I had with this film, was that some actors felt miscast. I thought Cena felt out of place here. Ethan Embry, Michael Rispoli, Gregg Henry, and Amy Smart are all fine here.

A total blast. A fun, thrilling and explosive action-packed adventure. A smart, sharp and wickedly funny movie that just keeps you entertained. A great buddy action-comedy in the spirit of Four Brothers and The A-Team. A great movie to watch. John Cena, Ethan Embry and Robert Boyd Hollbrook are just great together, sharing a great chmeistry that works well for their characters and the material of the film. It packs hard punch as well as big laughs, big action and big heart. A solid piece of pure kick-ass entertainment and fun. Action films with character development like this dont come around to often