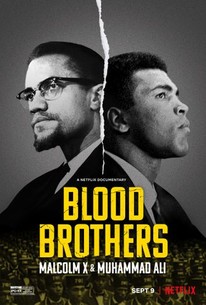 For three pivotal years, Muhammad Ali and Malcolm X forged a brotherhood that would not only change both men but change the world. Blood Brothers: Malcolm X & Muhammad Ali tells the extraordinary story behind the friendship -- and the ultimate falling out -- of two of the most iconic figures of the 20th century. Few people understand the bond these men shared. In this new feature-length documentary from producer Kenya Barris, director Marcus A. Clarke offers a fresh perspective by using insider voices and never-before-seen footage to chart this most complex of friendships, tracing the near simultaneous and symbiotic rise of the charismatic and outspoken Olympic champion who charmed the nation, and the ex-con-turned intellectual revolutionary who railed against oppression. Through interviews with those closest to them -- Malcolm X's daughter Ilyasah Shabazz, Ali's brother Rahman and daughters Maryum and Hana -- and cultural luminaries such as Cornel West and Al Sharpton, the film illuminates their meeting, bonding, and eventual falling out over discord within the leadership of the Nation of Islam.

"Blood Brothers" is worthwhile for the introspective investigation of lives so often, in the public eye, devoid of the tangled humanity that all interpersonal relationships carry.

[An] informative and engaging documentary.

A broad overview of an interesting, unexplored time that, while feeling a bit cursory at times, still manages to engage in a worthwhile and compelling discussion about these two historical figure's intertwined legacies with several decades of hindsight.

Powerfully illustrates the personal risks each man took in the service of freedom and equality for all Black people.

Just as soon as it picks up and becomes interesting, Blood Brothers falls apart again, leaning into familiar platitudes.

When black-and-white photos of the pair grace the screen, it practically vibrates with energy.

Fascinating to consider what might have been, yet this powerful doco throws more light on the political evolution of Muhammad Ali in his search for a mentor and role model

One emerges from this engaging blend of interviews and archival footage, with the sense that the alliance between Malcolm X and Muhammad Ali was too dangerous to last.

Doesn't have a ton to add to the established understanding of the story it's telling, but it assembles so much excellent footage that it's likely to appeal to even casual Ali buffs.

While you should also buy the book Blood Brothers (something this scribe will do himself), Marcus Clarke and his team make a strong effort in weaving together archival footage and insightful commentary from those who knew these iconic figures.

The documentary is a deeply personal experience, while also feeling a bit like it's only skimming the surface of what these two did and could have accomplished together.

There are no featured reviews for Blood Brothers: Malcolm X & Muhammad Ali at this time.