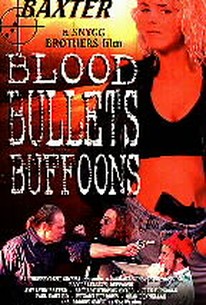 Natasha (Amy Lunn Baxter) is the drop dead sexy leader of a fearsome Russian crime gang. Setting her slacker boyfriend Jack (Zachary Winston Snygg) up to take the rap for a botched drug deal, Natasha underestimates her old flame and figures she'll get off without a hitch. Unfortunately for Natasha, it appears as if she has underestimated Jack's determination and is shocked to learn that he has made a daring prison break. Hot on Natasha's trail and thirsting for revenge despite his unyielding desire for his malicious ex, Jack tracks her through the sordid underworld; what will happen when he actually finds her is anyone's guess.

There are no critic reviews yet for Blood Bullets Buffoons. Keep checking Rotten Tomatoes for updates!

There are no featured reviews for Blood Bullets Buffoons at this time.