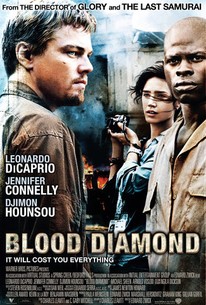 Set against the backdrop of civil war and chaos in 1990's Sierra Leone, "Blood Diamond" is the story of Danny Archer--a South African mercenary--and Solomon Vandy--a Mende fisherman. Both men are African, but their histories as different as any can be, until their fates become joined in a common quest to recover a rare pink diamond that can transform their lives. While in prison for smuggling, Archer learns that Solomon--who was taken from his family and forced to work in the diamond fields--has found and hidden the extraordinary rough stone. With the help of Maddy Bowen, an American journalist whose idealism is tempered by a deepening connection with Archer, the two men embark on a trek through rebel territory, a journey that could save Solomon's family and give Archer the second chance he thought he would never have.

Ronnie Nyakale
as Digger No. 1

Carol Behane
as Mother at the Bridge

Both excitingly well made and dispiritingly formulaic.

It's a film about exploitation that sometimes feels like it IS exploitation and is only going to leave you frustrated.

Blood Diamond has all the cinematic punch of a lengthy Nation article.

Issue-tainment. Puts the issue of conflict diamonds in the public eye. Whether or not that makes it a great drama is a slightly different question.

A comparatively honest effort from Hollywood but one fatally weakened by the familiar scent of compromise in its final reels.

Some will dismiss it as "typical Hollywood", yet that isn't always a bad thing. In so many movies, destruction and loss are dwelt upon because they are irreducible truths. But survival is a truth, too, and this film pays it often stirring witness.

Each of the lead actors does good work here - although Jennifer Connolly's war correspondent must to have an unseen hairdresser traveling with he r- but in regard to the social and political content, Zwick seems to have bitten off more than he could chew.

Though exhibiting plenty of potential with its production value, the film ultimately suffers from a lack of focus and indecisive direction.

Besides an inadequate love machine, the movie's also missing a proper villain.

The movie sometimes revels too much in the chaos and carnage of its setting, but superior writing and acting pricks the conscience exactly when needed.

It's clear that Blood Diamond takes quite a while to wholeheartedly get going...

Despite fine performances, Blood Diamond is an unfortunate disappointment due to heavy handed direction which dilutes its message.

i love this movie i cried at the end this is a powerful true movie that you cant help but enjoy, Decaprio is brilliant and does accent brilliantly really powerful entertaining movie that shouldnt be missed!

It's a bit formulaic but the performances of the lead actors (Hounsou and DiCaprio) are great enough to make this film worthy.

DiCaprio, Hounsou and Connelly all shine in one of the best films ive seen in a long time. Just kept me glued to my set the whole time i watched this. This was a great film.