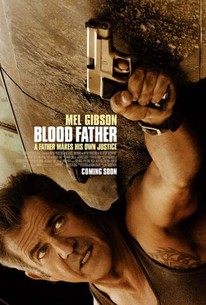 Critics Consensus: Blood Father meets every expectation a film fan could have for a latter-day Mel Gibson action thriller with its title -- and even, in some respects, handily exceeds them.

Critics Consensus: Blood Father meets every expectation a film fan could have for a latter-day Mel Gibson action thriller with its title -- and even, in some respects, handily exceeds them.

Critic Consensus: Blood Father meets every expectation a film fan could have for a latter-day Mel Gibson action thriller with its title -- and even, in some respects, handily exceeds them.

BLOOD FATHER stars Mel Gibson as Link, an ex-convict who fights to protect his estranged daughter from the drug cartel that is hunting her down. In this thrilling action film, John must use his connections from his past life and his skills as an ex-criminal to keep him and his daughter alive. BLOOD FATHER also stars Erin Moriarty, Diego Luna, Michael Parks, and William H. Macy.

Daniel Moncada
as Choop
View All

Golden Tomato Awards: Best Movies/TV of 2016
On DVD This Week: Ghostbusters, The Legend of Tarzan, and More
Pete’s Dragon Is Certified Fresh

The dialogue goes like a Gatling gun and the action is its match.

Blood Father boasts enough momentum and lively banter to compensate for any generic leanings. Robert Gantz' scorched cinematography keeps the heat on, even during quieter moments.

Some of the dialogue sounds a little written, though Gibson's tendency to bellow his lines like a wounded bull elephant compensates and carries us along with the story.

Gibson is only 60 years old, a few years younger than Liam Neeson, and so could conceivably continue appearing in action movies like this for years to come. He clearly has the knack for it.

There's an unexpectedly engaging performance from Gibson and terrific supporting turns from William H Macy as his neighbour and AA sponsor, and from Erin Moriarty as his wayward daughter.

In the grizzled spectacle Gibson willingly makes of himself, it has a B-movie equivalent of that A-plus Mickey Rourke comeback, delivered with just enough clout to count as a step in the right direction.

Bruce Willis, John Travolta, et al. - or their agents - could definitely take a leaf out of this film's book when it comes to choosing their next projects

It's not complicated, but it's a satisfying 88-minute drama driven by [Mel] Gibson's undimmed star power.

Like some of Mel's other B pictures, "Blood Father" delivers the goods. And that's all it ever promises to do.

Blood Father reminds us why Mel Gibson has had longevity in a career that chews people up and spits them out more often than not.

Full of ugly personalities and dirty imagery, it's a return to the glory days of unpretentious action thrillers that did what they set out to do, and nothing more.

"Mess with my daughter and you mess with me!", and so, okay, it's been done before. This edition is aimed directly at the absentee father segment of the cinema buying public and salves mucho guilt when Gibson gives his all for the little girl he left behind. With that as the basis, this does okay as a genre film, hitting most of the familiar points. Bill Macy and Michael Parks (in his next to last screen appearance) are underwritten but able. And Moriarty more than holds her own. S'okay.

Apparently this movie is based on a novel of the same name and a French action thriller. I did not know this and I'm surprised. Surprised that's its a French made movie because I certainly didn't get that vibe in the trailers. And I'm surprised at yet another novel adaptation, like almost every other flick! Again the plot is nothing really original (a rarity these days), its main hook is the fact we see old Mel Gibson back in action again. The plot starts with Lydia (Erin Moriarty) who is in a relationship with a gang leader called Jonah (Diego Luna). During a hit on some tenants Jonah claims stole money from them, Lydia accidentally shoots Jonah. Thinking she's killed him she runs off and gets in contact with her ex-convict father John (Gibson). Lydia explains the situation and John decides to look after Lydia at his trailer house in the middle of nowhere (hoping no one will find them). Alas Jonah's gang members come after Lydia and drag John into the fray. What follows is a somewhat slow moving chase thriller as John must protect Lydia from the gang out for revenge. I think the problem with this movie is the fact it doesn't really offer anything new (plus it literally feels like it could be another movie about old man Wolverine/Logan). Gibson's character is your standard gruff, hardassed, tattooed, ex-con who's turned his life around and deep down has a good heart. His slutty looking daughter Lydia is your typical slutty looking mouthy teen, who has gotten herself into shit and needs her daddy to bail her out. All the while being somewhat ungrateful about it along the way. The bad guys are your stereotypical tattooed Latino gangsters. And most of the folk we meet along the way are all scruffy looking redneck biker types, complete with some Nazi and Confederate imagery for good measure. As the story unfolds its not hard to guess what's gonna happen really. Obviously at first John and Lydia are a tad distant, Lydia doesn't completely trust John, and John wants to ween Lydia off the drugs and alcohol she's hooked on. It really is the all the usual beats. John must ask favours from various friends, some good like Kirby (William H. Macy) and some not so good like Preacher (Michael Parks). Speaking of stereotypical characters, Preacher has his own biker garage/club set up where he sells all his (Nazi and Confederate) war memorabilia. You know straight away not to trust this bloke. Anyway as time passes John and Lydia grow closer together until at the end Lydia realises how much she loves and needs John (naturally when its too late). I guess the million Dollar question was, was the films main selling point of Mel Gibson being the anti-hero protagonist enough? Could Gibson still deliver a knockout? In my opinion the answer to that would yes and no. Lets not beat around the bush here, Gibson has clearly changed his image in recent years. He's clearly been hitting the gym and getting roided up (health issues at his age?). Anyway performance-enhancing drugs aside, Gibson does look good despite the ravages of time on his looks. Strangely enough he actually looks even more badass in his old age and possibly even more of a better fit for an aged Wolverine. Gibson definitely dishes out a solid weighty performance bursting with raw scary beardy-faced energy. In fact his beard is almost its own character, its an awesome beard, the white patch on his chin being the clear highlight. So much so that when he shaves it off his character noticeably becomes less interesting. All of a sudden we lose the unhinged, wide-eyed, muscular, Wolverine-esque, bearded one. And we're left with a boring looking Mel Gibson from 'Payback' (1999). The thing is I believe you could swap out Gibson with any number of decent action thriller actors such as...Denzel Washington, Russell Crowe or Liam Neeson, and probably get the same result. So even though I liked Gibson in this movie, I'd say his presence wasn't a make or break factor. Overall I'd have to say I was actually somewhat disappointed with this movie. The trailer was pretty epic and kinda gave me the wrong impression really. I was expecting a more rock 'em, sock 'em action flick top heavy with kickassery. But what you get is a more heartfelt, slow paced drama with the odd burst of action that isn't really that good. Yes its authentic, its not over the top and stupid, but I just got the impression we'd be seeing more of Gibson kicking ass. We actually see very little of Gibson kicking ass which seems a waste considering all that muscle he's packed on. In the end the movie finishes as you knew it would do, in fact I'm sure we've all seen the same ending before in other movies. I can't help but think this could have been a really stonking gritty action flick, but Gibson wanted to show his acting chops (which aren't quite there I'm afraid). Its by no means a bad film or a mediocre film, its a very solid film, just not as good as the posters and trailers make out.

A gritty and exciting crime thriller, Blood Father is a compelling tale of redemption. The story follows an ex-con whose drug addict daughter comes to him for help when she accidentally shoots her boyfriend during a robbery and is hunted down by his cartel. Mel Gibson and Erin Moriarty both give impressive performances and have a good father/daughter chemistry. And, the characters are well-written (particularly Gibson's) and there are some nice touches of dark humor. It can be kind of formulaic at times, but overall Blood Father powerful film about a father's love for his child.

I always hate myself just a little bit when I like a Mel Gibson film, but "Blood Father" is actually very good. Despite the inane tag line (viz., "A Father Makes His Own Justice"), the film has a good script (even if somewhat cliched at times) with interesting characters and fine cinematography. Gibson's performance is excellent. I'm not a big fan of the dynamic sound editing, but otherwise it's good. Overall, it's a pretty darn good film.