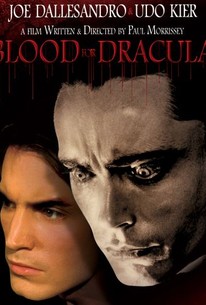 Roman Polanski
as Man in Inn

Sylvia Dionisio
as Perla
View All

Critic Reviews for Blood for Dracula

Morrisey long showed that his films, although more implicit in sex, drugs and characterizations, were really Hollywood films at the core.

One of the two schlocky horror comedies Paul Morrissey made in Italy in 1974... Blood for Dracula is the sexier and funnier.

Often startlingly beautiful to look at.

The film has that trademark combination of high artistic ambition and crude pornographic content, sometimes charming or amusing, sometimes repellent.

Not quite as much fun as Frankenstein, but wonderful to look at, with some great jokes - including the myriad of accents displayed by members of the cast. However, as fun as it is at times, it can't compare with Bela Lugosi.

Stylishly directed, atmospheric, funny, and intense enough to please gorehounds--especially at the climax.

Outrageous, hilarious and shocking, this is trash art at its very best.

Desperate for virgin blood, [Udo] Kier's wan, fussy vampire strategically heads to Catholic Italy, but the food sucks ("They put so much oil here on everything!").

It's a few bites away from being a delicious spoof on Dracula.

Pretty funny, especially Roman Polanski's cameo, though not nearly as wild as Flesh for Frankenstein -- but then again, few movies are.

One of the worst and least faithful Dracula intepretations ever made.

A horror film and a spoof -- but it's also something more. A strange, lingering sadness hangs over the film in its depiction of the end of an era.

Audience Reviews for Blood for Dracula

Paul Morrissey's "Blood for Dracula" is a campy, entertaining romp of gore, sex and willful overacting. Unlike most vampires, Udo Kier's Count Dracula is a sweaty, sickly waif who wouldn't scare a child if not for his huge, piercing eyes and intense manner. His attendant Anton (Arno Juerging) is actually more intimidating and is quite capable of pushing his master around. This Dracula only craves the necks of virgins (infamously pronounced "where-gins" in Kier's heavy German accent) and, in fact, "impure" blood makes him grotesquely regurgitate. He has worn out his welcome in his Romanian homeland, so he and Anton journey to Italy, counting on Catholic chastity to yield great rewards. They soon stop at the manor of the Marquis DiFore (legendary director Vittoria de Sica), who is blessed with four lithe, beautiful daughters. The family's finances have seen better days, so the Marquis and his wife (Maxime McKendry) are eager to hear the wealthy Count's cover story about seeking a mate. Dracula begins screening the daughters, but does not realize the two most eligible ones are casual libertines who are steadily ravaged by the estate handyman Mario (Joe Dallesandro, of course). The dire results of the Count's "taste tests" are ridiculous, bounding over the line between horror and perverse comedy. The youngest daughter may be just what he's looking for, but Mario -- a surly Communist who views the girls as "meat" even more than the Count does --- also has his eyes on her. Meanwhile, he and the Marquis are developing suspicions about the Count and his precious coffin (allegedly carrying the remains of a loved one). "Blood for Dracula" (sometimes called "Andy Warhol's Dracula" to milk the notoriety of its co-producer) was originally rated "X" but does not seem so shocking today -- the most explicit moments are a shot of Dallesandro's thrusting buttocks and a full-frontal view of a girl standing in a bathtub. The climax is gruesome, but no Monty Python fan will be able to keep a straight face. The script's political resonances are not as strong as Morrissey hopes, but photogenic women, elegant decor and dramatic lighting add up to a lovely-looking film with plenty of sensory titillation. And don't miss director Roman Polanski's unexpected, amusing cameo.

Superior to Flesh For Frankenstein, this is a great second film for Paul Morrisey's horror double feature. There are some truly amazing images in this one. Udo Kier is perfect as Dracula.

With a shortage of 'wirgins' in Romania, Count Dracula travels to Italy in search of good, pure Catholic girls to feast on, installing himself in the dilapidated mansion of an aristocrat with four unmarried daughters, ostensibly as a suitor for one of them. Since two of the daughters are slatterns and any blood but that of a virgin makes the count violently ill, the scene is set for some nice comic episodes. Although the acting is generally atrocious, "Blood for Dracula", unlike the terrible "Flesh for Frankenstein", has a number of clever touches which breathe new life into the vampire yarn, for instance the count applying make-up to disguise his sickly pallor. Dominique Darel, Silvia Dionisio and Stefania Casini, as three of the daughters, are very easy on the eye, and Roman Polanski makes a brief appearance in a scene which prefigures one in his own "Bitter Moon". Surprisingly well photographed and scored, too.

More fun from the gang that brought you Flesh for Frankenstein. This time Dracula (our pal Udo Kier), is a little particular about his meals -- he can only have the blood of female (I guess, I didn't see him attacking any young boys) "wirgins". If he drinks the blood of an experienced woman, he vomits up the blood (all charmingly detailed in Technicolor) and goes into wild convulsions and spasms. All this gets demonstrated when he travels to Italy to the home of a wealthy man (Vittorio de Sica -- how did they talk HIM into this?!) and his four daughters. Dracula tells the man that he is looking for a wife and heard his daughters were all beautiful and devout Catholics, which would prove that they were pure. Uh, not quite. See, there's this gardener (Joe Dallesandro) who's doing his best to give all the daughters a ride on his ho handle. Dracula tries to make a little time with the daughters too, but keeps getting sick because they keep lying about being pure and he keeps believing them (Fool me once, shame on you, Fool me twice...) What to do, what to do? I won't give anymore away. Let's just say that the film ends on a rather downer note for all involved. As usual, the effects are laughable, the acting and script atrocious. There are so many accents heard that it sounds like the United Nations. We can count on Big Joe though, with his New Yawk accent to make this movie more bizarre than it already is. More (boring) sex scenes and fewer disembowelments in this than Frankenstein, but no less ridiculous. Deserves only 1 star at best, but it's one of those "so bad it's good" films, which adds more stars for entertainment bang for the buck.