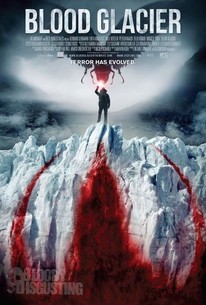 Janek is a technician on a climate observation station high up in the German Alps, one of a team of scientists preparing their outpost for visit from the Environment Minister. Their routine is interrupted by a strange discovery; a red liquid pouring from a nearby glacier, melted free from the ice crust that is shrinking with climate change. When the 'glacier blood' comes in contact with the local wildlife, it causes changes that are at first curious, then horrifying. Soon Janek and his team have their hands full defending themselves and the station against a growing horde of biological monstrosities. Using every tool at their disposal they must learn to work together to survive the onslaught. Harking back to classic creature features, director Marvin Kren combines classical filmmaking techniques with imaginative practical effects to produce a rollercoaster ride of laughs and jolts. (C) IFC Films

Coco Huemer
as Geli
View All

Yes, this is gruesome Euro-horror about the climate apocalypse and the possible end of life on earth as we know it, but it's also fun for the whole family.

"Blood Glacier" is too sleepy to do anything with its guano-stirring premise.

Sometimes genre-based filmmakers don't know how to make their material fun without making fun of their material, but that's not a failing of Mr. Kren's.

As if climate change weren't worrying enough, studies show it's leading to an uptick in the production of cheesy German-language monster flicks.

The attempts made to flesh out Janek and Tanja's rocky relationship, especially, are pure Screenwriting 101 contrivance.

The monsters are a scream, squishing crossbreeds that are all fur and teeth and exposed, pulsing, ready-to-burst viscera. And the screamers are a bit monstrous ...

Blood Glacier reads like a SyFy movie, but quality-wise it's several miles above teetering up in the mountaintops of B-movie-dom

While the film isn't a complete misfire, its ever so light creature twist isn't enough to make this memorable.

A worthy entry into the fairly populous subgenre of snow-set creature features.

Blood Glacier, with it's mostly practically created monsters, wastes an opportunity to distinguish itself from the many CG-dependent horror titles that saturate cinemas.

This is one of those endeavors that will no doubt endure the test of time on viewing lists of very ambitious bad movies.

Doesn't have a rich imagination, and while its locations are gorgeous, nearly saving the viewing experience, the mayhem contained within is lukewarm at best.

While this film certainly has a pretty good concept, somewhat reminds me of Splice, except much more of a creature feature horror film than an 'intellectual' one about the ethics of splicing together DNA from two completely different species. And I will admit that the film does have some decent gore and some pretty interesting creature effects, but it's just a movie that doesn't really come together as well as it probably came across on the script. I do think that, surprisingly, there's some decent character development with Janek and Tanja, involving their relationship, their break-up, their dog, etc. It does lead to some interesting moments. There's also the badass Minister, who isn't really that interesting of a character, but she does a lot of entertaining things in the film. I did find this to be watchable and the locations themselves make a perfect setting for this type of movie, sort of reminds me of The Thing, in fact, so at least there's that. Of course, the comparisons to Carpenter's The Thing are strictly location-wise and not quality-wise. The Thing is one of my favorite horror movies and this, as you may have guessed, is not. The locations also reminded of the first Dead Snow. Again, Dead Snow is pretty good. This is not. The acting is pretty decent and the ending itself is pretty good, but the movie never really clicked for me. I have no idea what it was, because it's not like there's anything awful about the film. It's all decent at best, at worst it's slightly below average, but there's nothing too offensive or annoying. You know the saying: the whole is greater than the sum of its parts, well this movie would be the exact reverse of that. Taken out of context, this film might actually look pretty good. Upon watching it, you realize that that's not the case. I can't exactly pinpoint where this film 'fell' apart, if that's an appropriate term for it, but it's not particularly entertaining, in spite of it having a recipe for it. Could be worse, but I wouldn't find this worth watching or recommending.