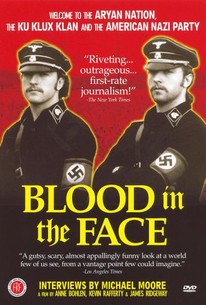 Blending archival and interview footage, Blood in the Face is a close-up examination of the emergence of far-right-wing groups in the United States in the early '90s. The film takes its title from the central myth of these groups, that because only whites can blush, only they feel shame, and therefore only they are human. In a series of amazing interviews, members of the Ku Klux Klan, the American Nazi Party, and the Posse Commitatus reveal the frighteningly over-rationalized logic behind their beliefs. "The Russians and Chinese are amassing tanks at the Mexican border" and "The men behind the Holocaust were Jews" are two of the more preposterous claims recorded by the film. While it's an investigation of the people behind the political power of politicians like David Duke, the film is also a study of how people are overtaken by hate and fear. The result is an essential and powerful documentary.

Critic Reviews for Blood in the Face

Audience Reviews for Blood in the Face

Documentary outlining the rise of racist groups in the United States in the 90s. Although the film is now a couple of decades old, one can image that these groups are still in operation today. Good messaging that is not terribly dated.

Blood in the Face Quotes