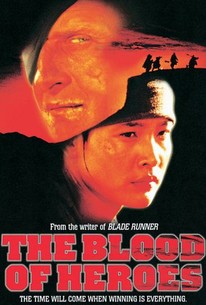 The Blood of Heroes Photos

Set on a post-apocalyptic Earth, this sci-fi feature focuses on the players of a brutal futuristic sport known as "juggers." When the brutish champion jugger receives a new challenge, tensions rise and eventually culminate in a bloody showdown masquerading as a league championship game.

Critic Reviews for The Blood of Heroes

Unlike Rollerball or Death Race 2000, it serves up the carnage with Biblical solemnity.

Plot development is slim. Much of running time is given over to the game itself, which seems to have no rules except that the winning team places the skull of a dog atop a pointed stick.

There's little to look at and nothing worth hearing. Even the game itself is a drag.

An unusually successful film of its kind, a good, lean variation on the post-apocalypse adventure-thriller that looks into the future to see the Dark Ages of the past.

The Blood of Heroes is a multimillion-dollar movie with about as much plot and depth as your average arcade game, but it's never quite as involving.

The film goes wrong by appropriating worn material, then constructing around it a narrative so ruthlessly straightforward it steamrolls over any possibility of dramatic suspense.

Poor old Hauer. Doesn't he long to play sensible characters in settings that don't involve post-apocalyptic societies and peculiar headbands? If he does, his agent never got the message.

There is much worse sci-fi stuff gathering dust on your video shelves, but that is really no recommendation at all.

Audience Reviews for The Blood of Heroes

Bit of a forgotten Hauer cult classic this with your typical popular post apocalyptic world where only the strong survive. Haven't seen this in many many moons and it wasn't quite as cool as I remember it but still decent, the plot has now been copied over and over by many films since but as this was back in 89 it feels like its one of the first, almost. An Aussie flick so you would be right in thinking there's a touch of 'Mad Max' in there but there's also a lot of classic barbarian type stuff and strong Roman Gladiator themes too, you wonder if Scott took inspiration perhaps. 'The Game' itself is kinda odd and simply revolves around sticking a dogs skull on a stick in the opponents half, like a touchdown really, whilst you batter your opponents half to death to protect yourself and your players. Dog skulls because they eat dogs in the future, why use them for this? who knows. Of course there is more going on when you scratch the surface, literately. Deep underground (because the surface has been ravaged by war) there are affluent rich folk living in complete luxury that run a much bigger harder league of the game called 'The League'...imaginative huh. Down there the players are treated like real stars with wealth and fame but the risks are greater...well life threatening (duh!). The aim of many players is to get into this super league, of course good old Rutger has already played there and survived. When you watch the game I did kinda get the feeling in reality it wouldn't last more than 5min or less but artistic license is in heavy use of course. The actual games aren't as violent as you'd think with minor blood and not much carnage, the film is quite tame really now but back in the day it was suppose to be pretty brutal. Hauer is perfect for the role as the quiet brooding leader 'Sallow' and Delroy Lindo impresses in a surprise if slightly racially cliched role. Overall the whole team are all pretty good in all their stereotypical post apocalyptic attire along with manly battle scars. The Aussie outback also adds to the inhospitable atmosphere and really gives this adventure a nice bleak barren feel as you would expect. Nice ending which isn't totally predictable...if you watch the uncut version, the US version was cut for some reason. Personally I prefer the film title 'Salute of the Jugger' as it offers a bit more mystery, what the hell is a jugger? dunno but it sounds kinda neat doesn't it.

Good futuristic with teams of gladiator-sportsmen roaming the countryside challenging teams to play the vicious game of juggers.

The Blood of Heroes Quotes