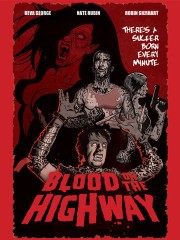 Blood on the Highway

Blood on the Highway Reviews

April 25, 2017
Blood On The Highway was awesomely hilarious.I knew when Bone picked up that...... & flung it at his dad I was going to like this movie.I didn't expect to enjoy it as much as I did though

Genevieve M
November 17, 2012
can i give this zero to negative stars? fucking shitty. do not see. 2 directors is a stupid idea.

Tonya V
May 22, 2011
This is probably the cheesiest movie ever but I had to give it a 3 because the soundtrack made me laugh so hard.

Nick A
August 26, 2010
Original movie that is part spoof, part horror. I liked it because it was refreshing, it didn't take itself seriously, and the leading actress was worth looking at. In general nobody here will win any oscars, but that shouldn't stop the audience from enjoying themselves a bit.

Tyler H
August 21, 2010
A good low budget horror comedy, full of non-stop, goofy, slapstick vulgar humor, that had me cracking up the whole time. I liked all the characters too, especially the two leads, and it also had tons and tons blood. Highly recommended for anyone that loves a goofy little horror/comedy, like myself. I had a total blast with this one.

Doug D
August 11, 2010
This is a classic. Great dialogue, snappy responses. Keeps the momentum going through the last scene. Gory funny vampireness, actually made me thirsty. Good extras on the DVD also.
"Seriously, not even vomit could tarnish that sweet a$$." is only the beginning. Enjoy.

Andrew N
½ July 15, 2010
This movie is funny as shit. Truly made of epic win. How do you kill a vampire? Drive an American flag through his motherfucking HEART!

Jason D
½ July 15, 2010
Let me hit the ground running and start things off by saying that Blood on the Highway is probably THE best Horror Comedy Iâ??ve seen in 2010â?¦possibly longer. Blood on the Highway sees friends embarking on a road trip through Texas to an annual 4th of July celebration where booze, broads, and blowing up shit will occur. Thereâ??s wussy push-over Sam (Nate Rubin), his foul-mouthed, tough girlfriend Carrie (Robin Gierhart), and bad-boy Bone (Deva George, who also handled the filmâ??s visual effects). Anyways, the three are embarking on their road trip until an unfortunate projectile vomiting mishap lands the group in the middle of nowhere with a soggy map, forcing them to require the assistance of night-crawling fan Old Zeke (played by Richard L. Olsen who is the first of this filmâ??s MANY scene-stealers). Old Zeke apprehensively points them in the direction of the small town of Fate, Texas where some strange occurrences have been taking place involving blood and junk. With that, the three head on down to Fate where they are immediately attacked by the townâ??s population, which now seems to be converted to vampires, though oddly resembling zombies in many instances.

The trio finds help in the form of militia man and president of Housechusetts, Bryon (Tony Medlin) who takes them to their new hideout of Ranchachusetts where we meet another pair of scene stealers, Bryonâ??s last remaining wife Lynette (Laura Stone, who takes slut to a whole new level in this film) and the super sleazy Roy (played by the filmâ??s co-writer Chris Gardner). Now, the gang of six must fend off the entire town of crazed vampires who set out to the house to tear their flesh apart. There are even a couple of familiar faces that pop up in the movie that may delight horror fans as much as they delighted me, including the great Tom Towles (Henry: Portrait of a Serial Killer, House of 1,000 Corpses) in one of those comical roles as a small-town country lawyer who rallies the vampires to attack the house, as well as Nicholas Brendon (TVâ??s Buffy the Vampire Slayer, Unholy) as the CEO of Consumart, the local corporate store chain (a subtle and delightful jab at a real life â??Mart that destroys towns and peoples lives) that may have had something to do with all of the vampire turning.

Let me just say that Blood on the Highway was an absolute treat to watch. I havenâ??t genuinely laughed that hard at a film in a long time, and a big, BIG part of that praise goes to the filmâ??s writers (Chris Gardner & Blair Rowan) and directors (Barak Epstein & Blair Rowan). Iâ??d be lying if I said I didnâ??t approach this film with some apprehension when I saw Epsteinâ??s name written on it, especially since I found his previous film, Prison-A-Go-Go, to be absolutely atrocious, but I gave him the benefit of the doubt since he was surrounded by a new crew of writers and co-director. The gamble paid off in the end thanks to the ingenuity behind this film, which Iâ??m thinking is ALL thanks to the highly gifted writers of this film who made just about every joke stick to the wall perfectly, not to mention tackling the tough task of making EVERY single character stand out in this film and have something to offer to the table, especially in the form of humor. Hell, Iâ??d say the weakest addition to the film was Towlesâ?? role, which was still awesome, but you almost didnâ??t even need him because of how good the film already was. I will say the addition of Brendon was totally worth it, as he was another scene stealer that gave the climax of the film an extra push it needed to certify that there was virtually nary a single misfire or dragging part.

Yeah, I know! My review sounds more like a love song to Blood on the Highway, but seriously, I have NOT been this impressed with such an ambitious D-I-Y independent Horror Comedy in such a long time. Whatâ??s so impressive is this mostly Texas cast and crew thatâ??s able to deliver a very decent looking film that makes careful use of their budget and yet are able to present an exceptional looking film in all facets, including acting, cinematography, script, etc. Thankfully, thereâ??s barely (if any) CG throughout the film as most blood and gore is presented through practical special effects (sadly, this is a lot to ask for in films these days). Thereâ??s one tiny offering of nudity, but the crude sex jokes and gags are plentiful throughout and make up for the lack of nudity (which, honestly, I did not mind at all). My biggest thing I canâ??t seem to get over is the humor in this. Itâ??s so well-pulled off. Granted, if youâ??re idea of comedy is safe, family-oriented pussy shit, then first off, how the hell did you come across my review and secondly, Blood on the Highway is clearly not for you. If youâ??re a fan of South Park-style comedy presentation with loads of quirky, tongue-in-cheek humor mixed well with crude fart and wiener jokes, then this movie will do you just fine. This is the type of film Zombieland wishes it could have been like, much more daring with its comedy and violence. Letâ??s not forget the bevy of quotes in this film that are quotable. Hell, thereâ??s enough in this film alone to beat out ALL of Will Ferrellâ??s films combined. You canâ??t go wrong with a film that has quotes like â??The Michael Jordan of Cunt Fuckingâ?? or â??Jesus cum in my mouth and take me to Shoneyâ??sâ??. Pure hilarity; I genuinely cannot say enough good things about this film and REALLY look forward to whatever these filmmakers do next.

Adrian M
June 28, 2010
Blood on the Highway is an ultra-low-budget horror/comedy. It's never really scary, although there's plenty of fake blood and gross-out gags. The comedy is hit and miss. The goofy, vulgar script has some laughs, some of the acting is pretty amateurish and there are stretches that really drag.