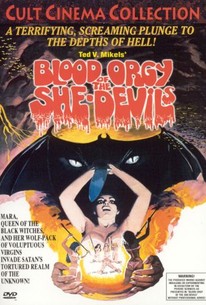 Self-made low-budget maven Theodore V. Mikels -- the brains behind such bottom-bill drive-in fare as The Corpse Grinders -- shot much of this tediously tacky mess (also known as Female Plasma Suckers) at his castle-like mansion in California. The castle serves as the base of operations for the lascivious witch queen Mara (the exotic Lila Zaborin) and her coven of curvaceous followers, whose weekend pastimes include, among other things, human sacrifices. The title would seem to suggest a kinky good time for Z-movie buffs, but this one is a real groaner, with static shots, fuzzy post-synched sound and shabby lighting. (Judging by those castle digs, Mikels should have been able to afford better equipment.) The end result is an exploitation movie that doesn't bother to exploit anything.