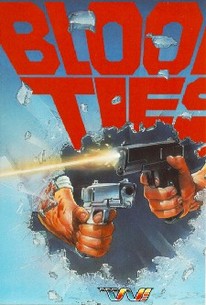 Blood Ties began life as a 4-hour Italian TV movie. The American version, which premiered December 14, 1986 on the Showtime Cable network, runs 125 minutes, and "runs" is the right word. Brad Davis plays an American naval engineer with familial ties to Sicily. Before he can offer a protest, Davis is sucked into the murderous machinations of the mafia. He is expected to win the confidence of his crimefighting Sicilian cousin Tony Lo Bianco-and then murder him. If Davis fails, his own father's life is forfeit. Don't expect any last-minute rescues or easy outs in this one. Featured in the cast are Maria Conchita Alonso and Ricky Tognazzi, son of Ugo. Blood Ties was honored with the "best television production" Grand Prize at the Venice Film Festival.

There are no critic reviews yet for Blood Ties. Keep checking Rotten Tomatoes for updates!

There are no featured reviews for Blood Ties at this time.