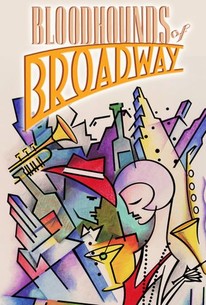 Bloodhounds of Broadway was one of many Damon Runyon adaptations filmed in the wake of the 1950 Broadway hit Guys and Dolls. Manhattan bookie Scott Brady skips town to avoid a crime investigation. He meets hillbilly Mitzi Gaynor and vows to get the talented young miss into show business. Thanks to her positive influence, the bookie agrees to face the investigating committee, but changes his mind and plans to skip the country. The broken-hearted Gaynor is gratified when Brady changes his mind again, confesses his crimes (none of them homicidal) and serves a year in jail. When he returns to civilian life, Gaynor is headlining at a posh nightclub, whose employees are all former crooks and gangsters--including Charles Bronson as a waiter! Bloodhound of Broadway was remade (sort of) under the same title in 1989, this time as a PBS American Playhouse special (subsequently given theatrical release) starring Matt Dillon and Madonna. ~ Hal Erickson, Rovi

Henry Slate
as Dave the Dude

Critic Reviews for Bloodhounds of Broadway

Miss Gaynor sings and dances fetchingly, and Wally Vernon is amusing as a hypochondriac mobster.

Audience Reviews for Bloodhounds of Broadway

Cornpone, mediocre musical with no memorable songs. Mitzi lays the honey chile stuff on very thick and is a bit hard to take, every once in a while she dances or sings and she forgets the corny junk and just becomes Mitzi and the movie is fine but then the song ends and we're right back where we started.. Not dreadful but the kind of picture that ultimately killed the big musical film.