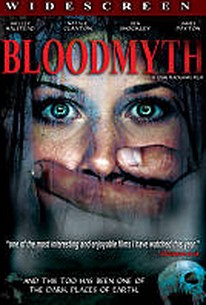 A young group of survivalists-in-training are stalked through the woods by a psychotic killer seeking victims for a blood sacrifice. Back in the 1990s, a maniac working for a private security company in Yugoslavia used the conflict in the country as cover for a series of grisly murders. Conducting the killings under the twisted guise of experimental archeology, he claimed numerous lives before vanishing into the countryside. Flash forward a decade later, and television personality Ray Morris has founded a company that trains people on survivalist tactics. His instructor Juliet Corman has invited a small group of recruits, including her sister Holly, to Kent for the initial course when someone begins stalking them from the trees. The body count steadily rising, Juliet and Holly vow to use their survivalist training to gain the upper hand on the relentless killer.

There are no critic reviews yet for Bloodmyth. Keep checking Rotten Tomatoes for updates!

There are no featured reviews for Bloodmyth at this time.