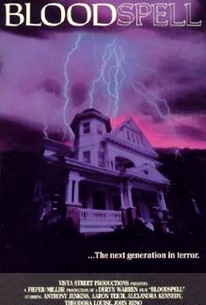 This dreary direct-to-video effort is set in a home for juvenile delinquents which is haunted by the ghost of a malevolent sorcerer who inhabits the body of his own son (Anthony Jenkins) and draws on the boy's life force in order to secure his own immortality. The possessed teen wreaks havoc with his fellow residents with his telekinetic powers, triggering some grisly accidents and making life even more difficult for the troubled kids. The script presents some interesting variations on the demonic-possession scenario, but could have used some serious tightening -- as indicated by the filmmakers' tendency to fill plot holes with standard slasher-style mayhem. Enlivened by some well-done special effects, but not enough to keep fingers off the fast-forward button.

There are no critic reviews yet for Bloodspell. Keep checking Rotten Tomatoes for updates!

Viewed on Troma tripple B Header- Vol 5 disk kind of reminded me of The Haunting of Molly Hartley (only she wasn?t possessed) It was ok. I like watching the older movies. They?re either ?better? in ways than they are now (like an actual story) or so bad its funny. oh yeah & in one of the ?kids? rooms look above the head of their bed!! LOL It?s a poster for Nightmare on Elm st. Looks like the knife fingers are scratching the wall to get out C